Following his recent APS Congressional Science Fellowship, David Somers reflected on how he used his scientific expertise to help move bills forward within the legislative process.

“My fellowship was exciting, and I view the work I did as laying a foundation for legislation that would make a positive impact on society,” said Somers, who earned his PhD in physics from the University of Maryland at College Park.

As a fellow in the office of US Senator Chris Coons (D-DE) during the past year, Somers drafted language and secured support for the Industrial Finance Corporation Act.

The act would establish the Industrial Finance Corporation of the United States and use a one-time appropriation from Congress to finance investments in high-tech manufacturing to promote innovation and create jobs through domestic production. In addition to Sen. Coons, the bill was sponsored by US Sens. Amy Klobuchar (D-MN); Chris Van Hollen (D-MD); Raphael Warnock (D-GA); Gary Peters (D-MI); Michael Bennet (D-CO); and Mark Warner (D-VA).

“There are a lot of great innovations that flow from our research and development ecosystem, but many hit that valley of death. That means it’s difficult to translate a viable product into a viable company with meaningful sales. The Industrial Finance Corporation Act would help address that problem by providing financing to scale up manufacturing of products that benefit our economy and support our industrial priorities,” said Somers, who added that the APS Congressional Science Fellowship enabled him to work on projects he found ''extremely interesting.” 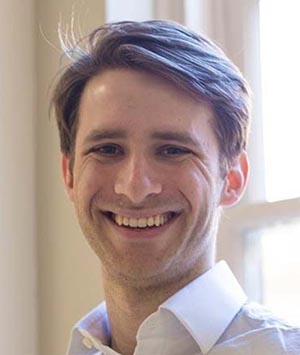 Sponsored by APS under the umbrella of the American Association for the Advancement of Science (AAAS) Science & Technology Fellowships, the aim of the Congressional Science Fellowships is to provide a public service by making available individuals with scientific knowledge and skills to members of Congress, few of whom have technical backgrounds. In turn, the program enables scientists to broaden their experience through direct involvement with the policymaking process.

Fellowships are for one year, typically running from September to August. Following a two-week orientation in Washington, DC, sponsored by AAAS, incoming fellows become acquainted with their new work environment. After interviews on Capitol Hill, fellows choose a congressional office where they would like to serve.

In addition to the Industrial Finance Corporation Act, Somers used his scientific background to help move forward the bipartisan National Manufacturing Guard Act of 2021. The bipartisan legislation would invest $1 billion over five years in the ability of the US government to respond to future supply chain emergencies. Besides Sen. Coons, the bill is sponsored by US Sens. Marco Rubio (R-FL); Maggie Hassan (D-NH); and John Cornyn (R-TX). An identical bill has been introduced in the House.

“My role was to build out details of the proposal and continue to ‘beat the drum’ about the impact that this bill would have in strengthening the US supply chain that has been strained during the coronavirus pandemic,” said Somers.

The same could be said for his involvement in the FORWARD (Furthering Our Recovery With American Research and Development) Act—bipartisan legislation that would expand tax support for American companies that invest in research and development (R&D) of new products and technologies. The Senate bill is sponsored by Coons as well as US Sens. Steve Daines (R-MT); Catherine Cortez Masto (D-NV); Todd Young (R-IN); and Maggie Hassan (D-NH). Additionally, a companion bill has been introduced in the House.

“This bill would improve access to an expanded R&D tax credit,” he said. The R&D tax credit enables businesses to reduce their tax liabilities if they invest in research and development.

Somers remarked that his Capitol Hill experience is serving him well in his career journey, which now involves working as a project leader with the Boston Consulting Group.

“Learning the intricacies of the legislative process and working with a diverse array of stakeholders will certainly be beneficial in my new role,” he said.

Mark Elsesser, Director of Government Affairs, said he was not surprised to hear that Somers made a positive impact during his fellowship year.

“There are many skills that STEM students develop during the course of their PhD that set them up for success on Capitol Hill. APS’s congressional science fellows use their technical background, analytic ability and communication skills to help inform policy decisions,” he said.

Added Francis Slakey, Chief Government Affairs Officer, “The APS Congressional Science Fellowship is a crucial program for the Society, and we are examining ways to make it even more impactful through the creation of a more diverse pool of candidates.”

To learn more about the APS Congressional Science Fellowship, visit the website.