2021 Nobel Prize in Physics Awarded for Research in Complex Systems

The Royal Swedish Academy of Sciences has announced the recipients of the 2021 Nobel Prize in Physics, which has been awarded for groundbreaking models of the hidden rules that govern complex systems, including predictions of human impact on Earth’s climate. The recipients are: Syukuro Manabe (Princeton University), Klaus Hasselmann (Max Planck Institute for Meteorology), and Giorgio Parisi (Sapienza University of Rome).

One half of the Nobel Prize in Physics is awarded jointly to Manabe, a Japanese American climatologist, and Hasselmann, a German oceanographer, “for the physical modelling of Earth’s climate, quantifying variability and reliably predicting global warming.” The other half is awarded to Parisi, an Italian theoretical physicist, “for the discovery of the interplay of disorder and fluctuations in physical systems from atomic to planetary scales.” Together, their work uses simple theories to explain how random, disordered, and complex phenomena arise and change over time.

“This prize in physics reflects the deep connections of our field to delving into mysteries that shroud the laws that determine the environment of our home, planet Earth,” said APS President S. James Gates, Jr. “The citation of the award clearly shows our discipline’s efforts to establish deep scientific knowledge behind such challenges as global climate change, pollution, and similar processes in complex systems. For with such knowledge, science and physics once more can be shown to be the 'survival instinct' of our species. This is the work of physics done on a grand scale for all of humanity.”

Added Gates, “In the case of the American recipient, Prof. Manabe, his is part of the historical tapestry delineating how physicists born in other nations continue to enrich the science of this nation.” 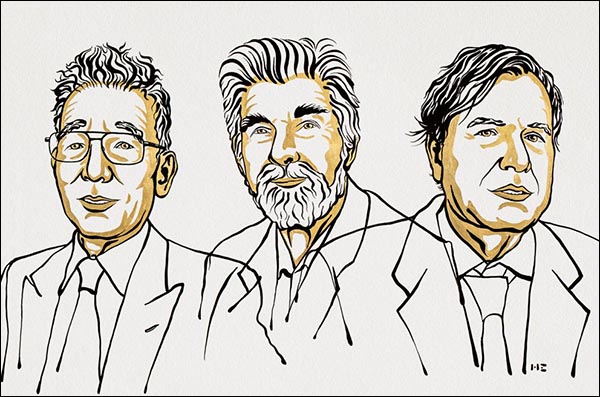 The Nobel Committee cited 17 papers in journals published by APS in their announcement, including six authored by Parisi: five in Physical Review Letters, and one in Reviews of Modern Physics. This marks the 11th consecutive year that a PRL article co-authored by one of the recipients has been cited in the Scientific Background on the Physics or Chemistry award.

"The Physical Review journals are among the most-trusted in physics, and their consistent citations by the Nobel Committee demonstrate the important role they play in advancing scientific discovery and research dissemination,” said Jeff Lewandowski, APS Director of Publishing.

Manabe and Hasselmann share half of the award for separate but complementary research that provides a solid, physics-based understanding of the Earth’s climate, a complex system of vital importance to humankind.

In the 1960s, Manabe led the development of climate models that laid the foundation for today’s models. He also demonstrated the relationship between increased atmospheric carbon dioxide and increased temperatures on the Earth’s surface. His research built on the work of fellow Nobel Laureate Svante Arrhenius, who studied the greenhouse gas effect 70 years earlier with a focus on radiation balance. Manabe’s models were the first to explore the relationship between radiation and the vertical transport of air masses due to convection, while also incorporating the heat contributed by the water cycle. Using this model, Manabe was able to show that carbon dioxide is responsible for an increase in the Earth’s temperature, not changes in solar radiation.

About 10 years later, Hasselmann also developed a critical model, which links weather and climate, showing that climate changes, unlike weather, can be reliably predicted. Taking into account the chaotic nature of weather and variable fluctuations that influence climate, such as wind strength or melting ice sheets, Hasselmann created a stochastic model for predicting climate variations. He would also go on to develop methods to identify climate "fingerprints" of both natural phenomena and human activities. His methods have been used to demonstrate that human emissions of carbon dioxide— not natural causes—have caused the increased temperature in the atmosphere.

Parisi receives the other half of the Nobel Prize for finding hidden patterns underlying seemingly random phenomena. Around 1980, he made crucial discoveries about spin glasses, a type of metal alloy with radical magnetic properties. Parisi developed a physical and mathematical model that solved a puzzle about how frustrated spins could coexist in the material. The structures he discovered in spin glasses were so fundamental that they shaped research in many fields, from biology to machine learning. He earned the 2016 Lars Onsager Prize from APS for applying spin glass ideas to computational problems.

“Glass is very familiar in nature, and also a complex object that we normally see but we don’t recognize as complex,” said Parisi by phone during the Nobel announcement in Stockholm.

Parisi’s work on disorder and complexity extends beyond spin glasses to include systems such as periodically recurring ice ages and patterns in flying starlings. Some of his current research analyzes big data from the COVID-19 pandemic. For his findings in elementary particle physics, quantum field theory, and statistical mechanics, Parisi also received the 2005 Dannie Heineman Prize for Mathematical Physics, jointly awarded by APS and the American Institute of Physics.

The Nobel Prize, first awarded in 1901, is widely considered the highest honor in science, economics, and literature. The 2021 Nobel Laureates will be awarded medals separately in their home countries, and they will receive 10 million Swedish kronor (approximately $US 1.15 million), half of which goes to Parisi, and the other half to Manabe and Hasselmann. The traditional Nobel Prize banquet will not take place in 2021 due to the COVID-19 pandemic.

The following article has been made free-to-read by APS: