When Emmanuelle Charpentier and Jennifer Doudna won the Nobel Prize in Chemistry in 2020, their CRISPR gene editor had revolutionized medicine, agriculture, and genetics in just a few short years. But already, plans were in the works to move beyond CRISPR’s simple scissors, which snip genes out of a DNA sequence.

They announced their latest progress on the first artificial immune system and CRISPR-Cas12a toggle switch, and shared unexpected nanopore tools for gene mapping and parasitic disease diagnosis, at a press conference during the meeting.

Using proteins to interfere with CRISPR offers one of the most promising pathways toward building custom genetic circuits. Two groups are investigating how to program the right genes to activate at the right time—and potentially shut down disease. 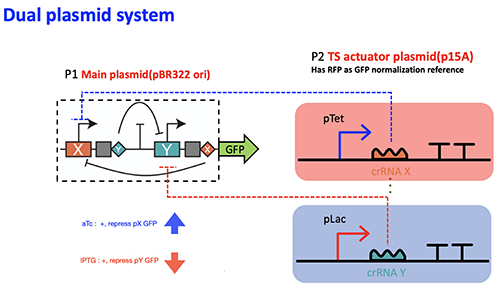 The COVID-19 pandemic revealed that vaccinations, while effective, cannot be developed and deployed fast enough to prevent a global health crisis from wreaking havoc.

“There is a delay in building up herd immunity,” said Yiming Wan, a doctoral biomedical engineering student at Stony Brook University. “By properly adapting and combining genetic editing tools with synthetic regulatory circuits, we may be able to develop genetic medicines much faster—protecting not just the healthy, but also patients or elderly people whose immunodeficiency means traditional vaccines work less well.”

“In other words, we may be able to develop a programmable, targeted artificial immune system,” said Wan. The technique could improve treatment of diseases from COVID-19 to cancer to Zika.

Wan and his collaborators are testing a new method for turning gene expression on and off using a Cas13d RNA enzyme. Their goal is to create a new CRISPR-based platform that allows a scientist to program a viral defense mechanism against RNA viruses like SARS-CoV-2.

But there are major problems when using Cas12a in particular. So the researchers developed a series of instructions for a tool that toggles between gene-on and gene-off, while maintaining cell stability in both states.

“It would be the first CRISPR-Cas12a toggle switch ever,” said Xu. “We can create programmable genetic toggle switches that mimic their electronic counterparts, and can help build more complex synthetic genetic circuits.”

“Nanopore sequencing involves measuring the electrical signal of DNA molecules as they pass through a tiny hole. This gives information about the shape of the molecule,” said CSULB biophysicist Alexander Klotz, who leads the investigations.

When you attach a protein, the blocked ion flow through the hole produces a map of the DNA. The team heated up DNA until only the adenine-thymine (AT) bonds melted. Then they added a special protein that only links up with the melted bits—showing exactly where AT lives on the DNA strand.

“It will be the first time that this protein is used to uncover genomic information,” said Klotz’s student Nathan Howald, who ran the experiment. “The technique fills gaps in several technologies. It combines the portability of a nanopore, the speed of genomic mapping, and the potential to work on all types of DNA.” 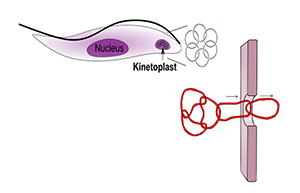 Illustration of a nanopore translocation of kinetoplast DNA extracted from a trypanosome parasite (above).

Nanopores can also help pierce the armor of Chagas’ disease, Leishmaniasis, and other parasitic diseases. The parasites have unusual DNA looped thousands of times like chain mail.

“We used this chainmail DNA to learn about the physics of a new type of mechanical-chemical bond, and provide preliminary data that may be used to diagnose parasite infections in the future,” said Sierra Breyer, the student who led the work.

Biophysicists have tried to simulate pulling the chain-mail DNA through a nanopore, but experiments seemed impractical or even impossible. Breyer broke the chain mail into smaller links to understand what holds them together physically.

“The new results settle a controversy about the role of friction within molecules,” said Breyer.

From nanopores to CRISPR toggles, the cutting-edge tools we need to solve some of the most dangerous illnesses lie within the basic physics of our human code.