Unraveling the Universe Through Knitting

Some people dream about monetizing their hobby. Others, like Elisabetta Matsumoto, make it a scholarly study. This talented physicist uses knitting as a way to discover and explain physical structures of the universe, while using principles of knot theory and soft matter physics to investigate and leverage characteristics of knitted materials.

While Matsumoto had been knitting for over a decade for fun, it was a chance encounter in grad school that started her on this career path at the intersection of knits, knots, and math. Her office mate at the University of Pennsylvania was working on a project involving a hyperbolic plane and when Matsumoto googled it, she found a community of people who crochet these planes and other objects in nature, including coral reefs. “I had always been interested in the geometry of surfaces…This was the first time I connected the dots that there is something mathematically interesting here,” she says.

Happy to venture down the rabbit hole, she began knitting and “played in the space for a while to understand the rules for crocheting things mathematically and making mathematical surfaces.” Given that she was also interested in knot theory and topics related to symmetry, “when I was applying for jobs, I spun some of those ideas together,” she says. “I knew there wouldn’t be a lot of competition starting out. And I got a lot of interviews from people who were curious about my work, even if it wasn’t a fit in their department.” 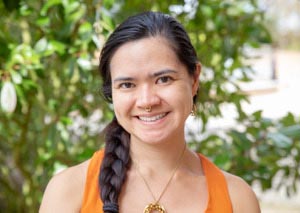 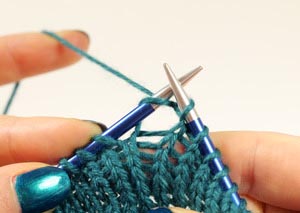 Now, as assistant professor in the School of Physics at Georgia Tech, Matsumoto leads a group that focuses on geometry and topology of soft materials, in particular the effects of nonlinear elasticity on emergent structural and mechanical properties in complex systems. Knitting serves her in two ways: it is the model and method to explore topological properties in nature. Additionally, she examines the physics and mathematics behind knotted objects, leaning on knot theory and a coalescence of materials science, applied mathematics, physics, engineering, and art. Her lab includes a loom machine.

Her road to science was a family affair; with a mother who is a geologist and a father who is a chemist, “my parents would say I didn’t have a choice” about going into STEM, she says with a laugh. Defiant, Matsumoto steered herself towards a surgery career, but when she hit organic chemistry, like many, she took a hard pass. Besides, while surgery would have been fun, “all the advances are made by people in math and physics,” she noted, and she wanted to contribute to knowledge discovery. As an undergrad at the University of Pennsylvania, she had many jobs in labs—in part because of her interest in science, but also because of a reason she says is hilarious. “I was shy and was mortified to work, for example, in the library where you would have to talk to random people.”

After a bachelor’s in physics, Matsumoto remained at Penn for a doctorate in physics with a specialty in chirality and elasticity in liquid crystals, something that set the stage for her shift into topology. “There is something nicely aesthetic about geometry, which I like too,” she says. “The topology is really beautiful because you don’t need calculus and all of the messy machinery of writing down lots of equations to deal with it. When people are probing things, you have mathematical diagrams. It almost seems tactile—you are moving these imaginary things around and using this to conduct proofs. I kind of like this reductionist side with building blocks, and on the other side it is really fascinating—the global properties you can get out of complex systems. I like that interplay.”

Her job continues to bring her joy, whether it is planning out projects, mentoring students, or engaging in science communications, something that has led to her being featured in the New York Times, Popular Mechanics, and other publications. Academia, and in particular Georgia Tech, suits her perfectly. “I can’t think of anything that gives you as much freedom of thought and ideas. I don’t have to deal with the bureaucratic side. I don’t have to worry about getting my paycheck,” says Matsumoto. “I get a good idea and no one’s going to say you can’t do that, and you can work with people around the world or across the street and everyone’s creative in their own way.”

The opportunity and, indeed, the responsibility, to be innovative is something that is always on her mind. “An important part of research that people tend not talk about, is how creative you have to be to make things work. We are used to being told that the person who paints or dances is creative and analytic people aren’t creative. But you have to be incredibly creative and resourceful and ingenious to get any research project working—it's always going to break, whether it is theory or experiment, and you’re going to have dead ends and the more out of the box thinking you have, the easier it is to find you way out of the dead end into something interesting. It may not have been what you were planning but it will be interesting nonetheless.”

Matsumoto is in the middle of the five-year NSF-funded project entitled “What a Tangled Web We Weave”, that examines the mathematics of textiles and knitting. She’s still polishing the mathematical proofs for one aspect that addresses what type of knots can actually be knitted. The other aspect of the project is equally fascinating and delves into understanding the elasticity of knotted fabrics. A piece of yarn may not have stretch to it, but once a sweater is knitted with the same yarn, the garment gains an elasticity. And with different patterns, you get totally different elastic responses. “We are trying to understand what is happening at the microscopic and mesoscopic level that gives these macroscopic properties to knits,” she explains.

She is also seeking to move from investigations of two-dimensional materials to 3D. “So far, we have only thought about flat fabrics, but a sweater or gloves have an intrinsic three-dimensional quality, and you build the geometry into the elasticity,” she says. “When you make things that have three-dimensional shape, you are distorting their in-plane characteristics. So can you use that to your advantage and create places that are distortions in one bit and really stiff in another bit?” The application of this research, especially with wearable electronics, where certain parts of the electronics need to be more rigid where others need to be malleable, is exciting.

Not surprisingly, Matsumoto has gained a fandom both in the knitting world and among STEM-enthusiasts, as she actively weaves together both communities. “I personally have a hard time separating my intuition as a knitter, someone who has done a huge amount of hand knitting, from what I understand mathematically,” she says. This connectivity is invaluable in her work, as she presses forward with new ideas. “Once you start playing with these materials, you’re just like ‘why, why, why?’ and there’s a lot of richness and behavior and I like that I can play with the types of math I like. That’s a big draw for me. I really like knot theory and differential geometry, which don’t always go together well. I like having problems where I am forced to learn new math, and [knitting] is a really nice framework for that.”