In Ohio, Michigan, and Indiana, Physicists Find a Home in One of APS’s Oldest Geographical Sections

Geographical sections are vital to APS. Membership in a geographical section, said former EGLS chair Cynthia Aku-Leh, can foster collaborations “in your own neighborhood”—between regional laboratories, companies, and schools. And in contrast to discipline-centered subgroups, like divisions, topical groups, and forums, geographical sections offer members opportunities to learn about research at nearby institutions, exposing members to areas of physics outside of their fields.

APS’s 10 geographical sections stretch from coast to coast, and EGLS is one of the oldest, founded in 1938 as the Ohio Section. It was renamed in 2006 and again in 2021, when the APS Council settled on its current and final name. “The new name now encompasses the regions that we actually serve,” said Aku-Leh, who led the renaming process and lives in Michigan herself.

EGLS holds semi-annual meetings, one in March or April and one in October. Each meeting typically draws 100 to 150 participants and features a slate of talks by leaders in different fields, along with presentations and a poster session. 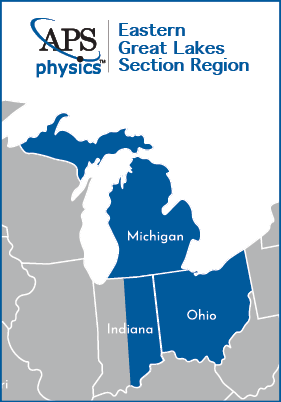 For many EGLS members, these meetings feel cozy, a refreshing change of pace compared to large international conferences. “It’s heartwarming in a sense to see what other people in the region are doing,” said Chair-Elect Bhujyo Bhattacharya of Lawrence Technological University. And because travel costs to regional meetings tend to be lower, EGLS meetings are accessible to a wider range of participants. To this end, the executive committee tries to change the meeting location from year to year, choosing host institutions in different areas in the region to encourage participation.

EGLS’s 2022 Spring Meeting at Youngstown State University in eastern Ohio was the section’s first in-person gathering since the start of the pandemic. The meeting, whose theme was “Pathway to New Physics,” featured talks on topics ranging from quantum computing to gravitational waves, as well as a special session on decarbonization in transportation.

Planning is underway for EGLS’s Fall Meeting, which will take place on October 21 and 22 at Lawrence Technological University in Southfield, Michigan.

EGLS encourages undergraduate and graduate students—who make up 35% of the section’s ranks—to participate in its semi-annual meetings. These meetings enable students to present their research, often for the first time. And the wide range of fields represented at the EGLS meetings, said Bhattacharya, can help students learn to tailor their talks to a broad audience—a vital skill.

EGLS meetings also give students a chance to learn about new areas of physics and even career development. “We organize sessions about professional development and diversity, and we invite graduate schools to come and talk about their programs,” said outgoing chair Jay Mathews, a professor at the University of Dayton in Ohio.

Niklas Manz, EGLS’s incoming chair, said that the executive committee will continue to build the section into a bustling home for regional physicists. So far, so good, but Aku-Leh acknowledges that the section would benefit from more involvement from physicists working in industry. “We already have a nice, diverse background of physics topics represented at EGLS, but we can do better when it comes to diversity in the places where physicists work,” she said.

Still, EGLS stands out as a lively and welcoming geographical section, offering members community, professional development, and learning opportunities. “Being a member helps to support physics in the region,” said Mathews, “especially our students, who are the next-generation scientists.”

Abigail Dove is a freelance writer in Stockholm, Sweden.