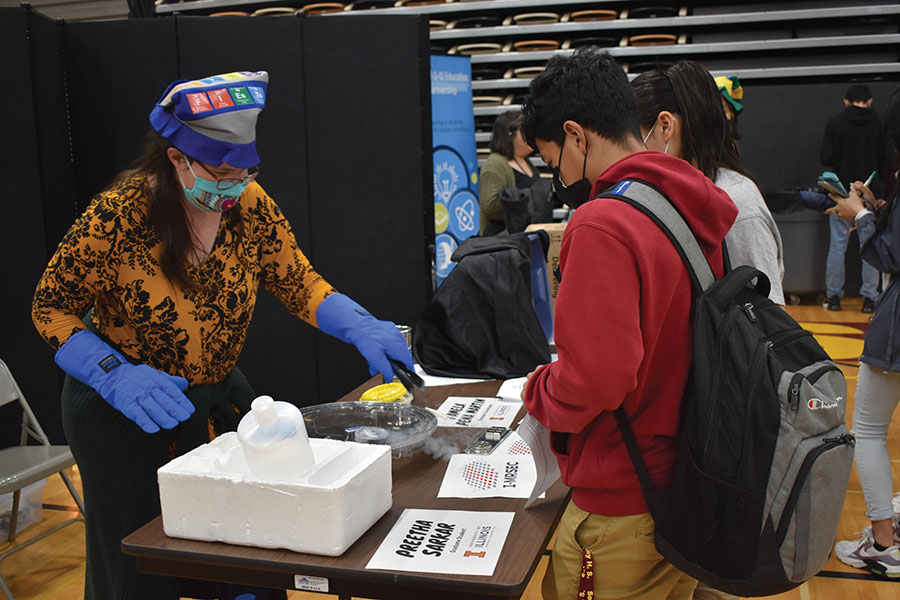 The annual APS March Meeting brings thousands of physicists together in one city—but this year, a group of physicists brought their enthusiasm for physics into the community. "It’s not what Chicago can do for APS, it’s what APS can do for Chicago,” quipped Brian Schwartz of the City University of New York, invoking the classic Kennedy quote. The idea: A Physics Fiesta, hosted at Chicago’s Eric Solorio Academy High School.

Schwartz and Smitha Vishveshwara, of the University of Illinois Urbana-Champaign, have experience bringing cultural events to APS meetings: In previous years, they had organized physics-related theater performances for attendees of the March and April Meetings. But before physicists descended upon Chicago for the 2022 March Meeting, they and collaborator Shireen Adenwalla of the University of Nebraska–Lincoln—all physicists and APS members themselves—wanted to shake things up. Instead of bringing culture and art to the physics meeting, what if APS, working with local physicists, brought science education and physicists into the Chicago community?

Russell Ceballos and Patrick McQuillan, local physicists of the Chicago Quantum Exchange, pitched Solorio as an ideal venue for the event. Solorio, which has a student population that’s over 95% Latinx and over 90% low-income, is one of Chicago’s top public high schools. The after-school Physics Fiesta invited local students and their families to a “night of science,” featuring physics demonstrations, science-themed Latin dance performances, a rap battle, and opportunities to meet physicists.

When the day came, the weather was typical for March in Chicago—rainy, windy, near-freezing—but that didn’t stop 500 students and parents from filling the Solorio auditorium-gymnasium.

“I think it was one of the highest attended events that we've had,” said Laura Vaca, STEM Program Manager at Solorio. “We saw students and parents from the community, from other neighborhood schools. It was a really, really good crowd.”

Attendees visited booths manned by physics professors, postdocs, and graduate students, who distinguished themselves with large, comical hats styled after the periodic table. Several booths, organized by scientific institutions across the state, led demonstrations. At one booth, participants stood on carts and tossed balls back and forth, demonstrating conservation of momentum when both the catcher and thrower rolled away from each other. In a center-of-mass experiment, Schwartz had children and parents try to get up from sitting in a chair without putting their feet under it and leaning forward—an impossible task. Another booth demonstrated a superconducting track, above which an ultra-cold, fast-moving puck appeared to float, a quirk of quantum mechanics.

Another booth allowed students to “speed-network” with physicists, including a Solorio physics teacher. Students took turns quizzing these experts about their careers and research.

“One of them asked me, ‘what's the best life advice you got?’” Vishveshwara said. “Tough question! I replied that it took a long time to realize this, but no matter what people tell you and how they try to shape you, just be yourself, and allow your passion and love to come through. And I could see their eyes light up.”

Stage performances were another highlight of the evening. Professor Lyrical, the stage name of Peter Plourde of the University of the District of Columbia, performed a STEM-themed rap; Physics Van, a traveling science performance group from the University of Illinois Urbana-Champaign, performed a skit with Star Wars characters that used lasers to burst balloons; Solorio’s Mexican Folkloric Dance Group, Los Alebrijes, built on the light theme with a traditional Mexican dance in which dancers balanced lit candles atop their heads; and Solorio’s Latin Jazz band provided lively entertainment.

Alexa Uribe, a Solorio senior who performed in Los Alebrijes, said she was very impressed with the student and community turnout. “The audience’s enthusiasm and interest radiated throughout the entire gymnasium,” she said.

For the Physics Fiesta’s finale, everyone feasted on Chicago deep dish pizza, tamales, and traditional Mexican drinks like horchata and agua de jamaica.

“Many of the families came up to me to thank me at the end of the night,” said Victor Iturralde, principal of Solorio. “I could really see the excitement in the young people. I thought to myself, I think we’re planting real seeds here. I'm totally confident that there are kids who are going to go into the sciences because of this event, because of the seeds that were planted.”

Encouraged by the success of Physics Fiesta, Adenwalla, Schwartz, and Vishveshwara said they are looking forward to working with more APS members and units to plan similar community-based outreach events at future APS Meetings, including next year’s, which is slated to take place in Nevada.

The event was supported by the APS Forum on Outreach and Engaging the Public, chaired by Adenwalla, and the Division of Condensed Matter Physics, chaired by Vishveshwara.