In 1972, Willie Hobbs Moore became the first African-American woman to receive a PhD in physics in the United States. On the 50th anniversary of this historic moment, we celebrate her, and I remember my personal, albeit brief, friendship with her.

Willie Hobbs Moore was born in Atlantic City, New Jersey, on May 23, 1934, to Bessie and William Hobbs. In 1954, the same year that the Supreme Court struck down school segregation in Brown v. Board of Education, she boarded a train for Ann Arbor, where she studied electrical engineering at the University of Michigan (UMich)—the only Black woman undergraduate in the program. She earned her bachelor’s degree in 1958 and her master’s in 1961. She worked as an engineer at several companies before she returned to the University of Michigan to pursue her PhD. 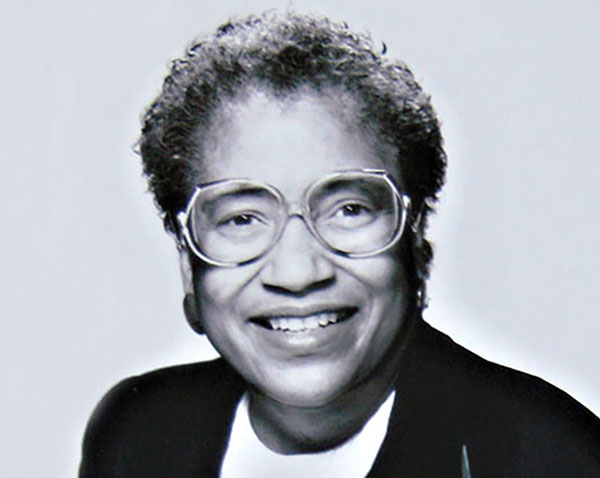 In 1972, Dr. Hobbs Moore made history when she received her doctorate in physics.

For five years afterward, Dr. Hobbs Moore worked as a lecturer and research scientist at UMich. She published more than a dozen papers on protein spectroscopy in prestigious journals, including the Journal of Applied Physics, Journal of Chemical Physics, and Journal of Molecular Spectroscopy.

In 1977, Dr. Hobbs Moore joined Ford Motor Company as an assembly engineer. She went on to help the company expand its use of Japanese methods of quality engineering and manufacturing. This work proved critical to boosting Ford’s competitiveness during Japan’s domination of the automobile market. She eventually became an executive at the company.

But her passions extended far beyond work. Dr. Hobbs Moore was involved in community science and math programs and was a member of The Links, Inc., a service organization for Black women, and Delta Sigma Theta, a historically Black, service-oriented sorority founded in 1913. She and her husband, Sidney Moore, who taught at the University of Michigan Neuropsychiatric Institute, had two children, Dorian Moore, MD, and Christopher Moore, RN, and three grandchildren.

I first met Dr. Hobbs Moore in 1992 at the Saturday Academy for African American Students, a community STEM tutoring program for which we both volunteered. When I approached her, she was tutoring a student in trigonometry; she was so focused that she didn't even look up. But when she came to find me at the end of the session, we connected quickly. We spoke about educating kids in STEM fields; the latest physics research, especially optics; and the history of Black physicists. I mentioned our efforts to increase the number of Black PhDs at UMich and elsewhere, and she told me that UMich and Princeton were among the top producers of Black physics PhDs in the 1950s and 1960s. Willie had a natural way of providing context and perspective.

Over the next couple of years, we would catch up at and after the Saturday Academy. But in early 1994, Dr. Hobbs Moore stopped volunteering. I didn’t know why; all I knew was that I missed our conversations.

As I learned later, she was losing her 24-year-long battle with cancer. On March 14, 1994, she passed away in her Ann Arbor home. She was only 59 years old. Her death was a profound loss for science, and for the communities she cared about so much. I remember so well her wit, wisdom, and warmth; our times together remain some of the most memorable experiences of my life.

The following year, the National Conference of Black Physics Students awarded Dr. Hobbs Moore the inaugural Edward Bouchet Pioneer award, given to distinguished physicists in honor of Dr. Bouchet, the first African American PhD physicist in the US.

This year, in commemoration of the 50th anniversary of Dr. Hobbs Moore receiving her PhD, I organized a symposium at the APS March Meeting addressing the topics we discussed at the Saturday Academy all those years ago. The symposium was sponsored by the National Society of Black Physicists, African-American Women in Physics, and APS Committees on the Status of Women in Physics and the Committee on Minorities.

After a welcome address from APS Past-President Dr. S. James Gates, a roster of exemplars spoke. The founder and CEO of the organization African-American Women in Physics, Dr. Jami Valentine, discussed the history and current status of Black women in physics. Dr. Gerceida Jones from New York University spoke on her STEM education efforts for Black and Brown youth in New York City. Dr. Nadya Mason from the University of Illinois Urbana-Champagne introduced her group’s latest superconductivity research.

The session concluded with a panel discussion on representation in physics. The discussion was nuanced and memorable, moving the conversation beyond merely discrimination, or “bias against,” to include the shortcomings of in-group favoritism, or “bias for.“

I also shared what I learned from her daughter, Dr. Dorian Moore, a few months ago—that to her children, Dr. Hobbs Moore referred to me as their brother, and that she talked about me the day she passed away. She hadn’t wanted to tell me about her illness because she didn’t want to distract me from my studies. To me, this was a sign of her deep, enduring care for those around her.

After the webinar, I posted a recording of the event on LinkedIn. Don Coleman, the former associate provost at Howard University and a good friend of mine, noted that Dr. Hobbs Moore had tutored him when he was an engineering student at the University of Michigan. He recalled that she taught from the fundamentals, and always made him feel as though she were merely reminding him of what he already knew, rather than teaching him unfamiliar things. Don said he wasn't surprised that Dr. Hobbs Moore pursued a physics PhD, given her mastery and depth of knowledge.

One of the most insightful questions that arose during the symposium was whether Dr. Hobbs Moore considered herself a pioneer. She and I never discussed this. But in the middle of a battle, does an extraordinary soldier stop to think about whether they’re a hero? I imagine they believe their actions are part of their duty. And Dr. Hobbs Moore had many duties: She was a physicist, researcher, and executive as much as she was a teacher, community leader, and advocate.

Perhaps most importantly, she was a mentor, a lifelong learner, and—to me and so many others—a friend. My life has been made richer by my encounters with Dr. Hobbs Moore, and I hope her story and legacy have enriched your life, too.