Physicist-Turned-Advocate is a Champion for Menstrual Freedom

Ask Manju Bangalore what she does for a living and her answer is straightforward. “[I’m] motivated by leaving the world a better place than I found it,” she says. “Everything I do is in that vein. I am a physicist, an actor, a poet, and I started two nonprofits, all in the hope that my work will create a better world for future generations.”

Bangalore, who graduated with a bachelor’s degree in physics in 2018, has made it her mission to combine creativity and curiosity, joy and justice, as she tries to bolster her community. Whether running her nonprofits or conducting research, “when I see a problem, my goal is to identify gaps and fill those gaps,” she says. As an undergraduate, she completed two internships at NASA’s Marshall Space Flight Center and Johnson Space Center, where she worked on the economics of in-space propulsion and cockpit displays for the Orion spacecraft, and a third internship at the White House Office of Science and Technology Policy under President Obama.

Physics was always going to shape the diverse career Bangalore envisioned for herself. But in 2015, two experiences prompted her to expand this vision. Like many people who menstruate, Bangalore had difficult, painful periods. She was talking about it with her mother one day when she had a revelation. “I said, hold up. I have a heating pad, Midol, a roof over my head, and most importantly, I had menstrual products,” she recalls. “I knew that couldn’t possibly be the situation for everyone.” 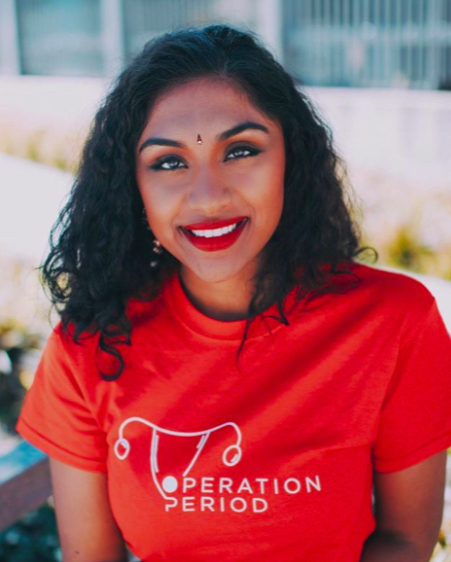 Bangalore wanted to learn more. What organizations existed to aid those who could not afford menstrual products? At the time, there were few nonprofits with this mission. She wondered if this could be an opportunity to serve.

Then, later that week, a strange coincidence solidified her idea. She was in line at the grocery store, buying menstrual products, when the person in front of her had their credit card declined—while they too were trying to purchase period products. “I bought both of ours and I was like, this is something divine, in terms of having this idea and having a physical representation of why this work is important,” she says. Bangalore launched Operation Period, which promotes “menstrual freedom,” combating stigma and advancing equitable access to menstrual products. Through art, education, community engagement, and direct aid, Operation Period has grown from a small Oregon initiative to a global effort, providing hundreds of thousands of menstrual products to people around the world.

“I don’t need to change every person’s life, but if I change one person’s life for the better, then I know I am doing what I am supposed to be doing,” she says. “My goal is not just to make my 12-year-old self proud, but to make other young girls know they can be limitless.”

Bangalore’s passion for purpose extended beyond Operation Period. Her father, who has Parkinson’s Disease, inspired her to found a second organization, Painting With Parkinson’s. The nonprofit provides free painting kits and art classes to those with the disease, which causes hand tremors and other movement problems.

The performing arts have also been important to Bangalore, who has been on stage since she was 10 years old. She has appeared in plays, a national ESPN commercial, and the music video for Beyoncé’s “Brown Skin Girl,” and she’s now a finalist for the Sports Illustrated Swimsuit Issue. For the Sports Illustrated application, Bangalore submitted a candid recording. “I talked about my struggles as a brown girl child of immigrants and in STEM,” she says, and she was open about her mental health battles.

Throughout her career, Bangalore has never lost her passion for science. “My dream since I was 4 or 5 was to become an astronaut,” she says. Bangalore is currently enrolled in a scientist/astronaut candidate training program with the International Institute for Astronautical Sciences. “This program allows you to conduct research that could one day be taken on a commercial research space flight,” she explains.

Her project will focus on mapping noctilucent clouds, which are found in the mesosphere and can help scientists understand human-caused climate change. Later, she’ll test space suits for microgravity stressors. She says that she hopes citizen scientists and researchers will have more opportunities to go on commercial space flights—and she plans to be ready.

But no matter her mission, her physics background has been an asset. Physics has helped structure her thought processes and boosted her credibility with potential partners. And it has complemented her work in social justice, entrepreneurship, and art.

“When I was in school learning these equations and theories and conducting experiments, very often I would forget there was a human element there, that was a person on the other side,” she says. “Being an actor and nonprofit executive has brought a human element to my work.”

And humans are what make this physicist tick. Period.