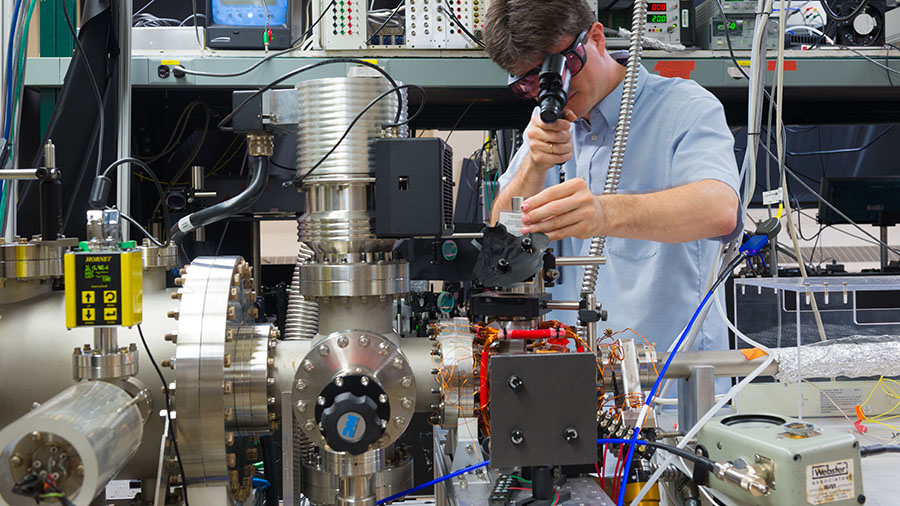 High on the Tibetan plateau and deep within Antarctica, tiny clues about the past are trapped. Noble gas isotopes like krypton-81 and argon-39 lay frozen in this ancient ice, and swirl in ocean currents or groundwater aquifers, after cycling out of the Earth’s atmosphere many years ago.

These isotopes are “nature’s clocks in the environment,” Yan-qing Chu, a graduate student at the University of Science and Technology of China (USTC), said at the APS Division of Atomic, Molecular and Optical Physics (DAMOP) Meeting in June. They’re uniformly distributed in the Earth’s atmosphere, and their noble status shields them from chemical alterations over time. As a result, these isotopes, dubbed “tracers,” can tell us a lot about what the climate was like when they were cycled out of the atmosphere—if we can detect them.

And detecting them isn’t easy. “Think about a kilogram of ice,” says Wei Jiang, a physicist at USTC. In it, there are only “about 2,000 krypton-81 atoms,” he says, a quantity that shakes out to a tiny isotopic abundance of 9e-13—akin to finding one particular grain of sand on the beach. Argon-39’s abundance is even smaller, at 8e-16. To detect those atoms, you need a system sensitive enough to count them one by one.

A method called atom trap trace analysis, or ATTA, is up for the challenge. ATTA uses lasers tuned to an isotope-specific frequency to excite and catch these atoms in ice or water samples. Those atoms fluoresce and can be counted, allowing researchers to date the samples using the known half-lives of isotopes like argon-39 and krypton-81.

It’s no fool’s errand. As it turns out, argon-39 allows researchers to peek through an essential window of geological time, one that has no other pinpointed dating method. “There is really nothing else in this age range,” says Werner Aeschbach, an environmental physicist at Heidelberg University. Argon-39’s half-life clocks in at 268 years, meaning it can date samples that are between 50 and 1,600 years old (krypton-81 can date older samples from between 30,000 and 1,300,000 years ago). This 50- to 1,600-year period matches neatly with the cycle of global ocean currents, which move water around the world like a giant conveyor belt, pushed along by wind and deep-water mixing. It might take one “parcel” of water 1,000 years or so to make it all the way around the conveyor belt, putting argon-39 in the sweet spot for dating seawater. “It’s a Goldilocks isotope,” says Zheng-Tian Lu, a physicist at USTC.

Studying the age of seawater, and thus tracking ocean currents over time, can help researchers better understand how the ocean mixes and moves, and even predict how the ocean will store atmospheric carbon dioxide. And dating glacial ice could help scientists reconstruct the climate over the past 1,500 years.

Argon-39 and krypton-81 are also useful for dating groundwater, an important step for studying the availability and suitability of these water sources for human use. Knowing how long it takes for freshwater sources like aquifers to refill, for instance, can help researchers understand and anticipate water needs. Researchers at Argonne National Laboratory recently used ATTA to trap and date krypton-81 in groundwater samples from Florida. They found that old seawater infiltration in the region’s largest aquifer persists to this day—a potential concern as sea levels continue to rise and salinize the water source.

Scientists are just beginning to harness the power of argon-39 dating, Jiang says, as it is newer and trickier than krypton-81 dating. Its diminutive environmental abundance presents technical challenges, and researchers are typically starting with small quantities of sample to begin with (there’s only so much ice that earth scientists can—or want to—drill out of the environment). Adding to the challenges, glaciers are swiftly melting because of global climate change, says Aeschbach, so researchers are on a race against time to sample and date many glaciers before they shrink or disappear in the coming decades.

New refinements to ATTA techniques could help. At June’s DAMOP Meeting, Chu presented recent work from USTC’s Laser Laboratory for Trace Analysis and Precision Measurements. The group has increased the trap’s precision for argon-39, lowering the requisite measuring time and boosting the system’s hourly count rate to 10 atoms per hour (a group at Heidelberg University had previously reached a count rate of 5 atoms per hour, and the USTC team’s goal is to achieve 100 atoms per hour, Lu says). With collaborators including colleagues at the Chinese Academy of Sciences, the group also created a pre-enrichment system that enriches for the isotope of interest, argon-39, by reducing the quantity of dominant isotope argon-40 in a sample by two orders of magnitude.

The fine-tuning will allow researchers to get through more samples faster and survey larger swathes of the ocean, Chu said at the DAMOP Meeting. “Large scale survey is now possible,” she said. “Oceanographers have been waiting for this for decades.”