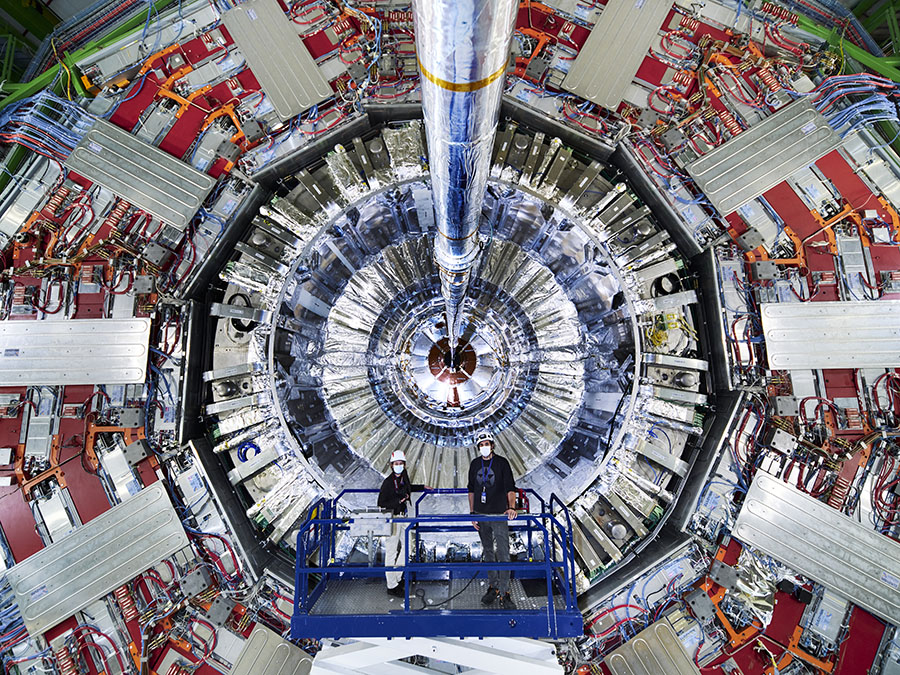 Particle accelerators like the Large Hadron Collider (LHC), buried nearly 600 feet below the streets of Geneva, are central to beam physics. The LHC’s CMS detector, shown here, takes “snapshots” of particles as they smash together.

Established in 1985, the Division of Physics of Beams (DPB) is a hub for more than 1,000 physicists interested in beams, their nature and behavior, and the instruments necessary to make and use them.

Beams—discrete streams of photons or particles—are essential to technologies like electron microscopes, spectrometers, and X-rays. The most powerful beams are used in particle accelerators, which use electromagnetic fields to propel and smash together charged particles. The largest particle accelerator is the CERN’s Large Hadron Collider, whose 17-mile-long tunnel is buried 570 feet beneath the city of Geneva, Switzerland.

Beam research is diverse. On the instrumentation side, beam physicists seek to update and refine existing particle accelerators and design future ones that are smaller and cheaper and build, and that incorporate the most cutting-edge science. Beams themselves are also a window into complex physics, like non-linear effects and collective phenomena.

Given this range, DPB membership is highly interdisciplinary. Scientists hail not only from high-energy, nuclear, medical, and plasma physics, but also from fields like engineering.

DPB helps organize several conferences on particle accelerators. One, the North American Particle Accelerator Conference (NAPAC), is scheduled for August 7-12 in Albuquerque, New Mexico. Held every three years, NAPAC meetings typically draw around 400 people from across the US and Canada.

Marlene Turner, a research scientist at Berkeley’s Lab Laser Accelerator Center, is DPB’s Early Career Member-at-Large. She characterized the conference as an opportunity to engage with other beam physicists, perhaps over coffee.

“In such a large field, no one can be an expert in everything. Building a network of who knows what— especially after having met them in-person—makes it much easier to reach out with questions in the future,” she explained.

The conference location is also a draw. NAPAC will be held in the center of Albuquerque’s historic Old Town, so attendees can also explore New Mexico’s famous Spanish, Mexican, and Native American cuisine. Nestled between the Sandia Mountains and the Rio Grande River, the city is a hub for hiking, kayaking, and—thanks to predictable wind patterns and stunning scenery—hot air ballooning.

The plenary sessions will cover the future of free-electron laser technology, applications of particle accelerators, and the search for axions and dark matter. Turner also highlighted a new addition to the NAPAC agenda: a contest in which graduate students and postdocs summarize their research in a two- or three-minute video. Winners get a cash prize, and their videos will play during a prime-time conference session. “The aim is to give more exposure to young researchers doing high-quality work,” she explained. “This kind of publicity is good not only for career development, but also for the field in general.”

Indeed, supporting students and early career scientists in beam physics, who comprise 20% of DPB’s ranks, is a key goal for the DPB Executive Committee. “We need young people coming in to build the future of particle accelerators,” Turner said. “Collaborations in beam physics can involve thousands of people. It takes a strong and motivated base to make things happen and move the field forward.”

DPB is also offering young researchers travel grants to attend, as well as prizes and awards, including for best dissertation and best paper, to recognize excellent work in the field.

Abigail Dove is a freelance writer in Stockholm, Sweden.