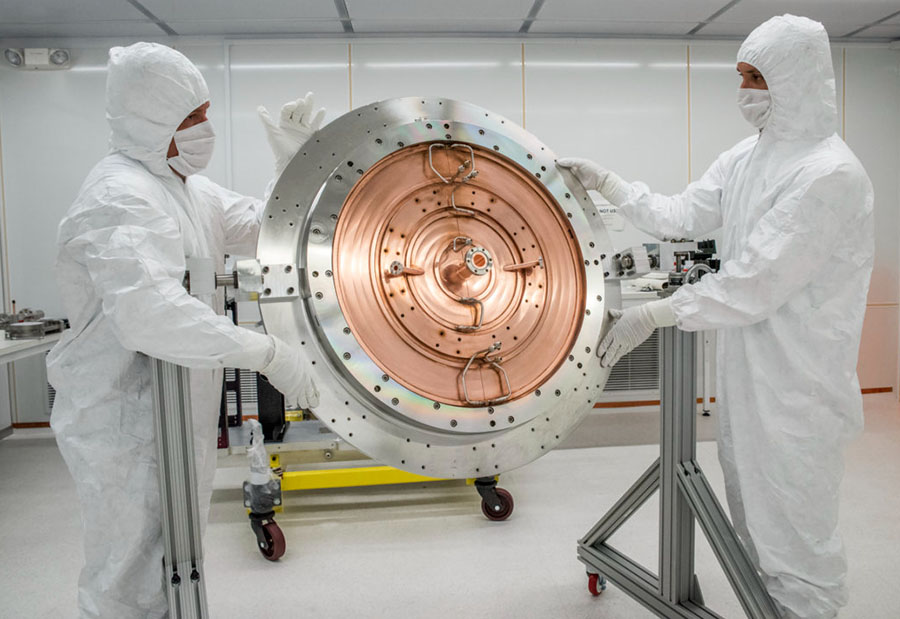 The LCLS-II—an upgrade to the LCLS, the world’s first hard X-ray free-electron laser—under construction in California. Here, scientists work with a part of the LCLS-II electron gun.

In 2009, the Linac Coherent Light Source turned on its laser to beam the most intense X-ray light the world had ever seen. By wiggling electrons between a 130-meter stretch of magnets, the machine—which sits near Stanford’s campus in California—produces X-rays in fleeting pulses, each quadrillionths of a second long. A single pulse can create light that’s 100 times more intense than the light you’d get if all the sunlight hitting Earth were focused onto a thumbnail.

LCLS was the first of what are called X-ray free electron lasers, or XFELs. Other countries have since built XFELs of similar ilk: in Japan in 2012, in South Korea in 2016, and in Germany in 2017. All of them, like LCLS, are kilometers-long in size and cost around a billion dollars to build.

When scientists gathered in Orlando at this year’s week-long meeting of the Division of Atomic, Molecular, and Optical Physics (DAMOP), hosted by the American Physical Society, research at XFELs had plenty of time in the limelight.

Because they can penetrate dense materials, these high-intensity X-rays can see inside—and even alter—the microscopic structure of objects opaque to optical light. For example, researchers have used bright XFEL pulses to create and investigate plasmas, with the aim of better understanding planets and stars.

The short wavelength of X-rays also allows for high-resolution imaging. The X-rays’ short pulses work like an extremely fast camera shutter: They trigger chemical reactions and then take “snapshots” of electrons darting around molecules, creating what scientists call “molecular movies.” Some researchers have used this technique to study photosynthesis at the atomic level.

The movies contain more than just visual information. Thorsten Weber of Lawrence Berkeley National Laboratory studies reaction microscopy, a technique in “its teenage years,” Weber says. He uses the technique to “film” a movie of a molecule breaking apart while simultaneously measuring the angles and kinetic energies of the ejected particles. XFELs also make it possible to study ions and electrons in a reaction at the same time, says Weber. Before XFELs, scientists studied electron behavior and ion behavior separately, as ions are over a thousand times heavier than electrons.

During a presentation at the DAMOP meeting, Weber outlined one of the challenges of using XFELs for molecular movies: time. To make a movie, a researcher fires an X-ray pulse at the molecule of interest, triggering a chemical reaction. Then, a second pulse illuminates the molecule for imaging. But current XFELs only produce pulses up to thousands of times per second. This might sound fast, but the researcher must trigger the reaction millions of times, so it can take days to make a movie. With so many researchers worldwide competing for time to use these machines, that pace is a challenge.

But what if the X-ray that spurs the chemical reaction, and the X-ray that illuminates it, could be fired in the same pulse? Weber presented a method for keeping time in this case, to track when motion takes place. The technique would cut down on the time a researcher needs at the laser to make a movie.

Now, Weber is working to combine the X-ray light with an ultraviolet laser. In this setup, researchers would first shine lower-energy UV light at a molecule before imaging it with X-rays. The initial UV illumination would more closely mimic how sunlight interacts with organisms, while the X-rays would provide high imaging resolution.

Linda Young of Argonne National Laboratory presented work at DAMOP related to studying and controlling the X-ray pulses themselves. The XFEL produces a spiky, noisy spectrum that researchers must measure before experiments. However, this measurement is difficult, because it typically requires the researcher to divert the X-rays with solid beamsplitters that do not tolerate high intensities well. In a recent study, her team devised a way to measure the spectrum with a beamsplitter made of neon gas using a technique called ghost imaging.

Young’s team has also used the XFEL facility in Germany to study the interactions between X-rays and neon gas. When an X-ray pulse strikes neon, it emits light, and this light in turn changes the spectrum of the X-ray pulse. This outgoing spectrum reveals information about the electronic structure of the neon atoms. While neon has a simple structure, Young says these studies will help them investigate more complex molecules in the future. She also plans to study the effects of the X-ray-and-neon interaction on the pulse’s shape over time.

As XFELs are just over a decade old, researchers like Weber and Young are still figuring out all the ways to use them—and they’ll soon have a new toy to look forward to. Construction of the LCLS-II, an upgrade to the LCLS, is scheduled for completion by the end of the year. This new XFEL will be capable of producing up to a million pulses per second, compared to the 120-per-second pulses of its predecessor.

For researchers, having more machines will make a big difference. “It gives us the opportunity to really systematically go after the understanding needed for our dream experiments,” says Young.