Nuclear physicist who guided his field dies at 91 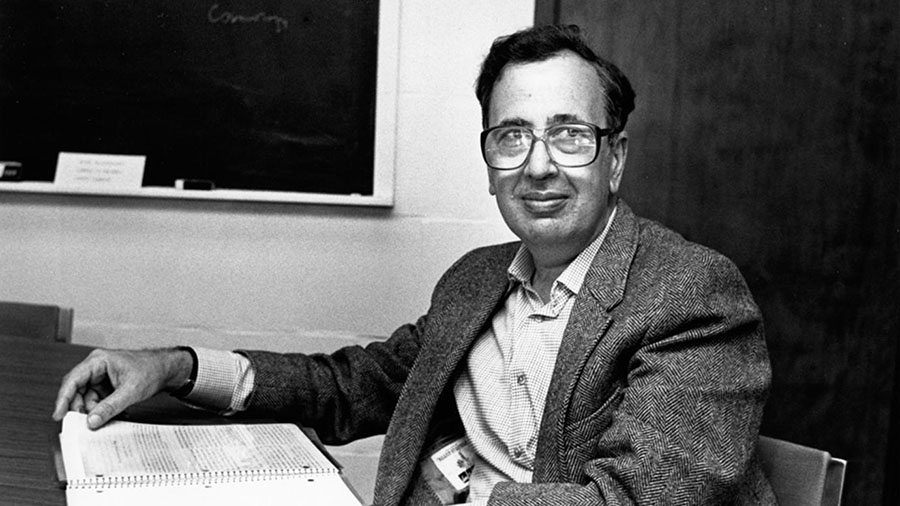 John Schiffer, an experimental nuclear physicist who steered the course of nuclear physics for over half a century, died June 6 in Illinois.

Over his seven-decade career, Schiffer won a variety of accolades, including the 1976 Bonner Prize in nuclear physics for “significant contributions to numerous aspects of nuclear structure,” and “his unusual influence in helping to maintain and spread high standards for precision and clarity.” Schiffer was an associate editor for Reviews of Modern Physics and a Fellow of both APS and the National Academy of Sciences.

Throughout his career, Schiffer investigated nuclear structure, specifically single-particle states, where one nucleon is displaced to a different nuclear shell. He was also a scrupulous debunker of tenuous claims, and a big-picture organizer of nuclear physics. “He would really set the standards for the future—what are the open issues, and how do we address them?” said Jerry Nolen, a colleague at Argonne National Lab.

John Paul Schiffer was born November 22, 1930, in Budapest, Hungary, to Ernö and Elizabeth Schiffer, both physicians. As a Jewish family, they were targeted during the Nazi occupation, but survived thanks in part to the Swedish diplomat Raoul Wallenberg, who saved thousands of Hungarian Jews during the Holocaust. In 1947, Schiffer emigrated to the US, where he lived with his aunt and uncle before attending Oberlin and pursuing physics.

After graduating in just three years, Schiffer went to Yale, where he was introduced to nuclear physics and got his first job: painting the new cyclotron blue. Finishing again in three years, Schiffer moved on to what is now Rice University in Houston. In 1959, he discovered that an isotope of iron had a powerful Mössbauer effect—it absorbed and reemitted high energy photons without recoil, pushing the effect from a novelty to a useful tool in the lab.

In 1960, Schiffer married Marianne Tsuk, a fellow emigree from Hungary. Four years later, while Marianne was writing her thesis on x-ray crystallography, the couple had their first child, Celia—John did most of the typing because “the noise made the baby kick.” Their second, Peter, was born three years later. As a female scientist in the 1960s, Marianne faced pressure to quit. But in his autobiography, Schiffer wrote that he “always took it for granted that [Marianne] should pursue a career.”

At Argonne, and later the University of Chicago, Schiffer hit his stride, performing experiments on nuclear structure. Transfer reactions, in which a projectile fired at a target nucleus caused an exchange of nucleons, would become a mainstay for the rest of his career. From reactions like these, Schiffer saw things others missed.

“He would plot and plot and plot, and then sit back and chew his glasses,” said Ben Kay, a colleague at Argonne. “He would do this in talks, and everyone knew that the brain was churning.” For Schiffer, data was sacrosanct: it needed to be clearly presented and accessible to others, deserved its pride of place in a paper, and shouldn’t be overshadowed by speculation.

Though Schiffer discovered anomalies—he and Nolen found a strange 10-percent discrepancy between the nuclear energies of calcium and scandium that to this day baffles nuclear physicists—he was perhaps best known for debunking extraordinary claims. When another physicist claimed to find fractional charges on niobium spheres, Schiffer performed multiple experiments to corroborate it—peering at oil droplets, collecting dust from an electric fence—but found nothing. Other debunkings included strange results in positron data, an overly energetic neutrino, and explosive hafnium. “As a measure of the respect John's work had in the field, when the Argonne group did one of these experiments, in large part, then the community said it was settled,” said Don Geesaman, an Argonne colleague.

When he was 78, Schiffer and Kay developed a new method for analyzing neutrinoless double beta decays, which if observed would confirm that neutrinos are their own antiparticles. Particle physicists had struggled with an uncertain, wildly variable range of nuclear matrix elements—but Schiffer realized it was possible to pin down the range using old techniques from transfer reactions to compare two nuclei. He continued publishing new research until months before his death.

Throughout his career, Schiffer was methodical. “There would be astonishing preparation, down to every hour of what we're going to do in this experiment, what spectrometer settings you'd have, what targets you'd use,” Kay said.

This organizational tendency extended beyond his own research: For half a century, Schiffer helped the nuclear physics community plan its future, pushing for creative new experiments. “This is the first long range plan we ever had to go through where John wasn’t a key player,” Nolen said.

Schiffer was also committed to mentoring younger physicists. Geesaman recalled his Stony Brook advisor saying, “I went and sat at Rudy Peierls’ knee in Birmingham. Go to Argonne, and sit at John Schiffer's knee and learn how to be a physicist.” Schiffer was in constant contact with his postdoctoral students and left daily “see me” notes, and then emails, which Kay reports piled up into the thousands.

“He cared deeply about mentoring and helping younger physicists,” said Peter Schiffer, his son, and a condensed matter physicist. An acknowledgment in Peter’s own 1992 paper on superfluid helium-3 attests to a father’s interest: “We also thank JP Schiffer for valuable insights on the interaction of radiation with matter.”

Schiffer treated close colleagues like family, too. “The community of physicists was very much our network of close friends—essentially extended family,” Celia Schiffer said. An international group of physicists gathered with the Schiffers for picnics and holidays.

Beyond physics, Schiffer loved nature. “Some people go to church; John went on walks,” Nolen said. Every Sunday for years, the Schiffers visited the nearby Morton Arboretum, and every summer went hiking in the Colorado Rockies.

As an immigrant and Holocaust survivor, Schiffer was passionate about the freedom to explore nature as a scientist. “Being a scientist and working on research brought him tremendous satisfaction and joy, and he was grateful for the opportunities that the career path had given him,” Peter said.

Daniel Garisto is a writer based in Bellport, New York.