Some researchers are using the tools of physics to study social processes like elections. 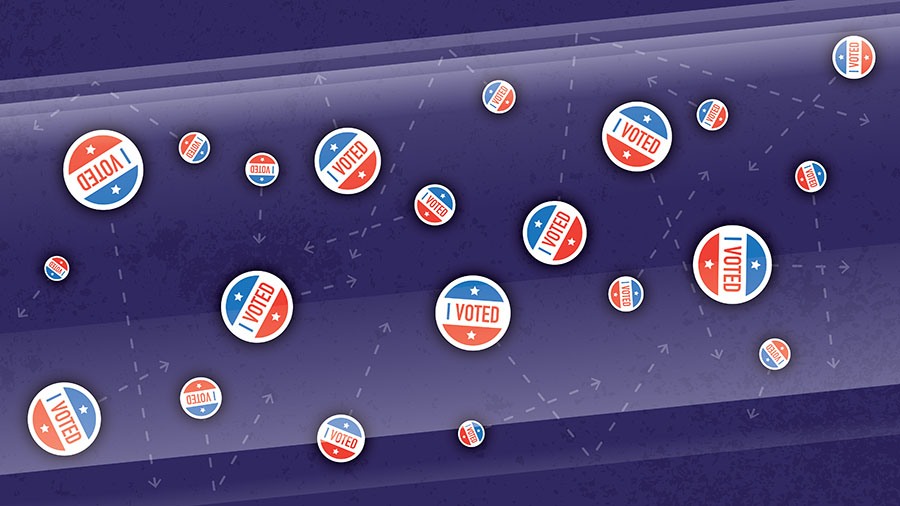 Comparing an electorate to a gas might seem like a stretch, but applying physics to social systems—including elections—has produced interesting results. This August, scientists discussed some of this research at the 33rd IUPAP Conference on Computational Physics (CCP22), a meeting that APS co-sponsored.

Statistical physics, in particular, is used to explain the properties of a large collective from the properties of its parts. This is most often applied to different forms of matter, but in studies of large populations of people, the same principles might be relevant.

“Statistical physics is a very powerful tool to study large quantities,” said Hygor Piaget M. Melo, a senior researcher at the Enrico Fermi Research Center in Italy, who spoke at CCP22. “You can almost see the behavior of these systems as a collective action of particles.”

In 1999, researchers published a paper in Physical Review E that analyzed the results of federal deputy elections in Brazil. When the candidates were ordered by the number of votes they received, the researchers found that a small fraction of candidates received the vast majority of votes; all the other candidates got very few. When graphed, this data closely followed a power law, a well-known mathematical relationship.

Enamored with the pattern, statistical researchers rushed to study the underlying mechanisms. “There was an avalanche of papers trying to explain this,” Melo said.

In 2011, Brazil passed a law requiring candidates to publish detailed information about their campaign finances. Melo and his collaborators took advantage, investigating the relationship between campaign spending and number of votes in the 2014 and 2018 elections for federal deputies in Brazil. Could the data shed light on the power law seen across elections?

The researchers modeled the votes as particles in a gas and the candidates as energy states the particles could occupy, maximized the entropy of the system, and watched what happened with the distribution.

They found that the correlation was not linear: doubling the amount of money spent in a campaign did not double the number of votes a candidate received. Even so, the distribution of wealth matched the power law distribution of votes initially seen in 1999.

“[Campaign spending] might not be everything,” Melo said, but it seemed to explain “the majority of the distribution.”

The elections in Brazil relied on open list proportional representation, where voters first pick the party they prefer, and then their preferences for individual candidates within that party. Seats assigned to each party correspond with that party’s share of popular support.

The US, however, uses a “first-past-the-post” voting system, where a candidate who receives the most votes wins. The loser doesn’t get representation, even if they received 45% of the votes and the winner received 46%.

This has dramatically impacted the two countries’ politics. Where Brazil has five political parties that control the absolute majority of federal seats, the US has only two—to interesting effect, according to Alexander Siegenfeld, a doctoral student in physics at MIT, who has used physics to study instability and polarization.

“In a stable process, if I change the electorate’s opinions by a little bit, the outcome changes by a little bit,” he said. “[But] elections can also be unstable, where you get these really different outcomes from year to year even though it doesn't seem like the populace is changing their opinion that much”—at least, not relative to the swings in election outcomes.

His study, published in Nature Physics, found that US elections went through a phase transition—a common concept in physics—in 1970, from stable to unstable. He cited the transition from George W. Bush to Barack Obama in 2008, then from Obama to Donald Trump in 2016, as examples of relatively small changes in voters’ party affiliation resulting in massive swings on the political spectrum.

“We can imagine a lot of reasons why this is problematic,” he said. “It really encourages special interests to try to sway the election, because if they can just give a little push, they can have a big effect.”

His team found that the Ising model, developed to explain the behavior of ferromagnets, describes how electoral systems can become unstable. In the model, interactions between magnetic dipoles in a ferromagnet can lead to a large-scale phase transition, where the system becomes unstable.

The key result is that after the phase transition, the instability of the electoral system leads to the development of “negative representation,” where a small move in the electorate in one direction could lead to an elected candidate that tends toward the opposite direction. This may be a consequence of the two-party system, where each election is a choice between two candidates: for example, if the choice is between a center-left and far-right candidate, and the prevailing opinions move left, far-left voters may stay home if the center-left candidate’s views are too far from their own.

Modeling voters as gas or magnetic particles might seem oversimplified—it is, say Melo and Siegenfeld—and there’s plenty of debate about the limits of these tools. But Melo’s and Siegenfeld’s results speak to the potential of physics to help us understand our world.

“Humans aren’t particles,” said Siegenfeld, but the field might help answer a more fundamental question: “What are the conceptual approaches behind physics that have made the study of physics so successful, and can we apply those more broadly?’”