Stephanie Mack, the 2021-22 APS Congressional Science Fellow, wraps up her year in Congress.

From wildfires to floods, the effects of climate change wreak havoc across the country — a reality that has shaped the work of physicist Stephanie Mack, the 2021-22 APS Congressional Science Fellow. Since last fall, she has worked on energy and environmental policy for Democratic Sen. Sheldon Whitehouse of Rhode Island.

“Being trained as a scientist, you bring a certain perspective when crafting policy and identifying outstanding questions,” she said.

Because environmental and energy policies often rely on complex scientific issues, having a scientist on a policymaking team has big benefits. APS’s year-long fellowship program makes a scientist available to members of Congress, who rarely have scientific backgrounds, and lets scientists be directly involved in policymaking. The fellow completes a two-week orientation in Washington, D.C., and then is matched with a congressional office or committee.

During Mack’s fellowship, Whitehouse partnered with Democratic Sen. Chris Coons of Delaware to introduce the Federal Carbon Dioxide Removal Leadership Act. The bill, intended to promote U.S. innovation that combats climate change, is a companion to one in the House of Representatives. Mack helped the team introduce the bill earlier this year.

“The bill would enable the government to create a market for nascent carbon dioxide removal technologies,” Mack said — technologies that could help the U.S. meet its target for reducing carbon emissions. The bill also “involved a lot of stakeholder engagement,” she added, “so it was satisfying to introduce the bill with broad support.”

Mack’s interest in science policy was piqued at the University of California, Berkeley, where she earned her PhD in physics. There, she also co-founded Berkeley’s Science Policy Group, which hosts speakers and discussions and plans events related to science policy.

After receiving her doctorate, Mack sought to tackle science policy as a Congressional Science Fellow. “I wanted to better understand the legislative process,” she said, “and explore a broad swath of environmental and energy policy areas.”

As a member of Whitehouse’s “Green Team,” Mack — in addition to her work on carbon dioxide removal — advocated for greater deployment of advanced nuclear reactors. She also helped research and draft a letter to the White House’s Office of Science and Technology Policy about the environmental toll of cryptocurrency mining, which emits an enormous amount of greenhouse gases, and the need for more transparency around its energy consumption. 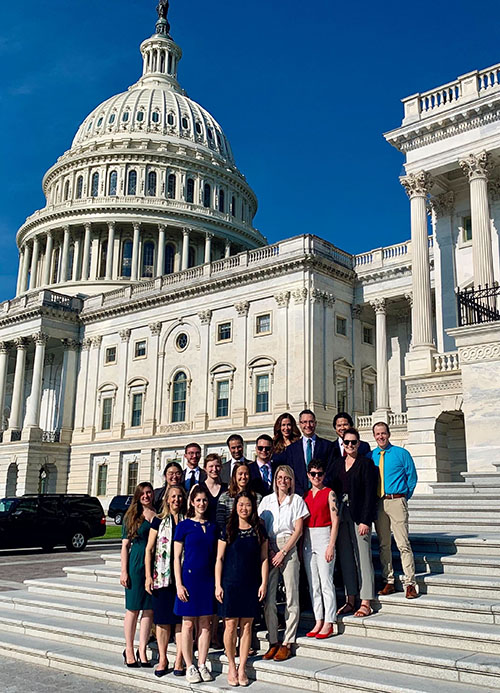 2021-22 AAAS Congressional Science and Technology Policy Fellows. Stephanie Mack is wearing sunglasses and a black jacket in the upper right.

“She is now regarded as one of the Senate’s foremost experts on the subject,” said Whitehouse, who recently hired Mack as a member of his legislative team because of her outstanding work as a fellow.

But Mack won’t be with his team much longer: She recently accepted a fellowship in the State Department with the Bureau of International Security and Nonproliferation. There, she’ll work to support nuclear power, “part of the solution to help meet the nation’s climate goals,” she said.