For more than two decades, APS has published data on physics degrees in the U.S., including degree-earning by women, racial and ethnic minorities, and international students. To update this data, APS typically recruits the help of a Society of Physics Students summer intern. This year’s intern, Lucy Corthell, is a junior at Juniata College in Pennsylvania studying engineering physics.

“What really caught my eye was the science and equity parts coming together” in one experience, says Corthell.

Over the coming months, APS will add data from the 2019-2020 school year, pulled from the Integrated Postsecondary Education Data System (IPEDS), to the APS education statistics. IPEDS data is also used to populate the Society’s interactive resource “How Does Your Institution Compare?”

So, what does the newest data say about trends in physics higher education?

In 2020, 25% of physics bachelor’s degrees in the US went to women — the highest percentage ever recorded. This might sound like progress, but the story is complicated: This number also peaked two decades ago, at 23%, before declining to just 19% in 2015. That means twenty years elapsed with only a few percentage points gained for undergraduate women in physics.

“It’s concerning to see,” says Corthell, but “being informed can also be helpful, because then we can learn about how to improve.”

The trend isn’t just an issue in physics. Although the percentage of women earning degrees in STEM (science, technology, engineering, and math) grew steadily between 1970 and 2000, it dipped abruptly in the early 2000s. We don’t know exactly why. Since then, progress has been mixed. In computer science, math, and statistics, the percentage of bachelor’s degrees earned by women decreased over the past two decades and hasn’t recovered; in the earth sciences, numbers have finally crept back to 2002 levels.

This is hardly a triumph, but there’s reason to be hopeful: In terms of the percentage of bachelor’s degrees awarded to women, every STEM field except math and statistics now shows an upward trend. 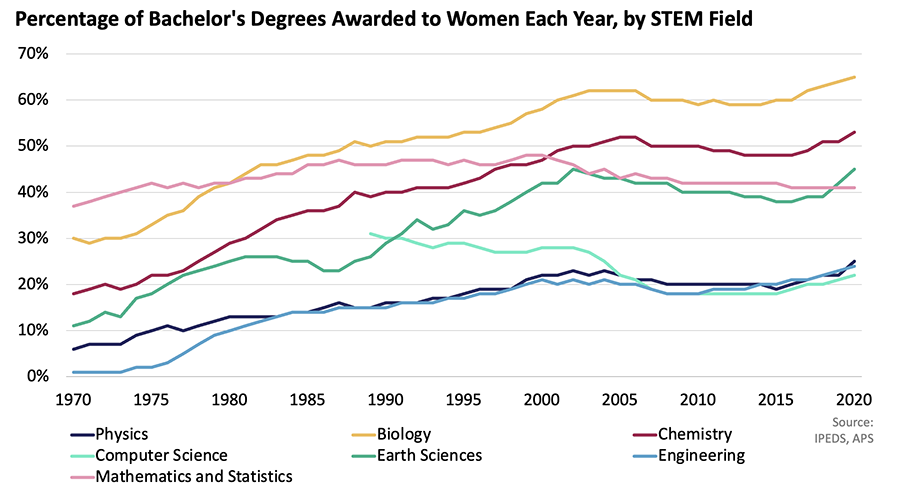 Echoing challenges at the undergraduate level, gains in graduate physics have stagnated in recent years. From 1966 to 2010, the percentage of physics doctorates awarded to women increased from 2% to 20% — and then mostly stopped growing. Since 2010, the number has hovered around 20%, dipping periodically. As of 2020, this figure sits at 21%.

As a percentage, students of color aren’t gaining traction at the doctorate level

The 2020 data shows another trend: Collectively, Black or African American, Indigenous, and Hispanic or Latino American students earn more physics doctorates today than a decade ago — but as a percentage of total doctorates awarded, their representation remains the same: about 6% of doctoral degrees. Interestingly, though, the percentage of bachelor’s degrees awarded to students in these groups nearly doubled over that same period, from about 9% to 16%.

Corthell is concerned about the doctorate-level trend, which has persisted despite an uptick in programs intended to support students of color pursuing doctorate programs.

“It’s a shame right now that there continue to be a lot of roadblocks and obstacles for so many people,” she says.

Despite limited doctorate-level progress, Hispanic and Latino American students in physics have made major gains at the undergraduate level in the last two decades, now earning over 12% of physics bachelor’s degrees.

A closer look at the data reveals another interesting trend. Since 1995, the percentage of bachelor’s degrees in physics awarded to Hispanic and Latino American students has inched up each year. But in 2011, that rate of increase more than tripled, outpacing growth in the college-age Hispanic and Latino population in the U.S. 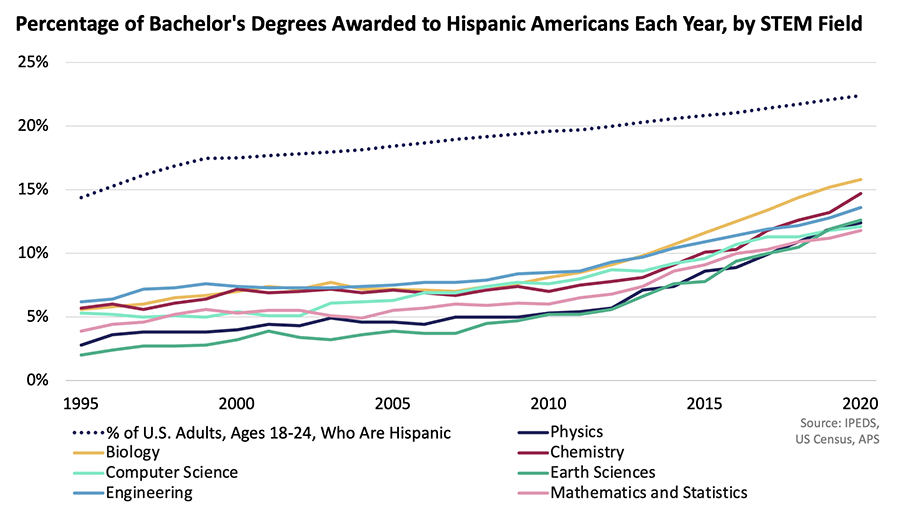 If this trend continues, physics bachelor’s degrees awarded to Hispanic and Latino American students could be proportional to the college-age Hispanic population in a little more than a decade.

In contrast, although about 100 more Black or African American students earn bachelor’s degrees in physics annually today than in 1998, the percentage of bachelor’s awarded to students in this group has declined, from about 5% to just over 3% today. This is due in part to a drop in the number of physics bachelor’s degrees awarded from historically black colleges and universities, or HBCUs. 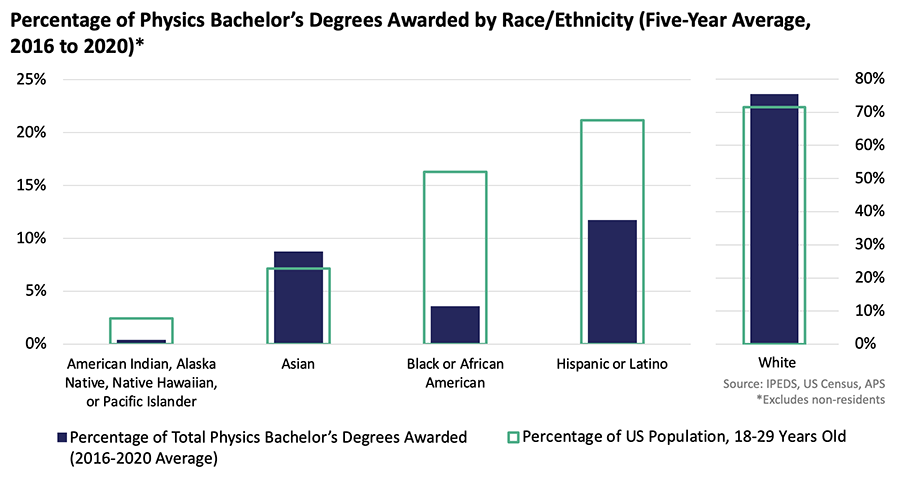 For Corthell, diversity makes physics better for everyone. “It feels like you’re more included,” she says. “In a group that is aware of our differences and committed to working together, it is, I’ve found, very successful — we can bounce ideas off each other.”

Where do we go from here?

Enormous questions remain. How did the pandemic affect enrollment? Which students did the crisis impact most? It will be years before we have a complete picture, in large part because of the lag in IPEDS data collection.

For Corthell, data-sharing is the first step. She also wants the community to do what’s needed to make physics an inclusive, welcoming environment. She encourages physics educators to use resources published by the Effective Practices for Physics Programs initiative, or EP3, and the initiatives of the APS Inclusion, Diversity, and Equity Alliance program.

“I just want everyone to have the opportunity to find their enjoyment in physics,” says Corthell.