With support from the APS Innovation Fund, Nathan Berkovits’ team in São Paulo hopes to train teachers across Latin America. 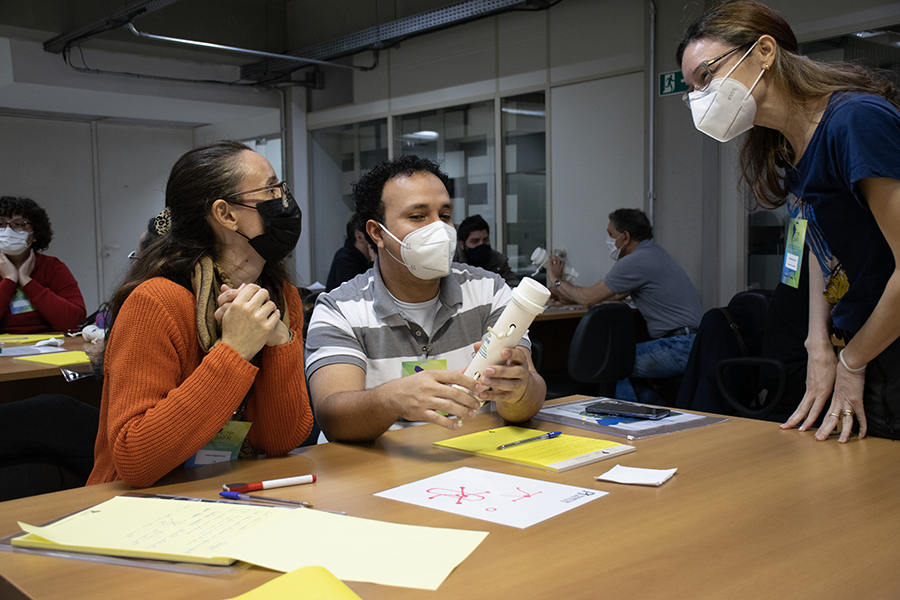 Facilitators work with Brazilian high school teachers in a Perimeter Institute physics training in June 2022. Here, the teachers, acting as students, build a physical model of a black box.

In 1994, physicist Nathan Berkovits, a Massachusetts native with a doctorate from the University of California, Berkeley, packed up his life in the U.S. and moved to São Paulo, Brazil. Now, nearly three decades later, and with the support of the APS Innovation Fund, he’s tackled a new challenge: sharing physics with Spanish- and Portuguese-speaking high schoolers.

Before the move, Berkovits had visited the region with his first wife, a Brazilian physicist studying in the U.S., and grown fond of the country’s culture. But he also realized there might be physics opportunities in Brazil that the U.S. lacked. “I like the idea of being at a place where I can do things that weren’t done before,” he says.

Now a full professor at the Instituto de Física Teórica of São Paulo State University, a research institute, he says “the scientific opportunities are almost the same.” He has graduate students and grants from the São Paulo research funding agency, and his salary affords him a comfortable quality of life, he says.

But in diverse São Paulo, the experience for many Brazilians isn’t the same. “The difference between rich and poor is something that you never get used to,” says Berkovits.

These wealth disparities impact schools. This is because students’ socioeconomic backgrounds influence their education outcomes, particularly in Brazil: According to the Organization for Economic Cooperation and Development (OECD), for every 10 socioeconomically advantaged students who score at or above reading proficiency in Brazil, only about 5 disadvantaged students do — a greater disparity than for most OECD countries measured.

Math is no different. “In Brazil and South America,” Berkovits says, “many of the public high school students have difficulty with mathematics,” which can hinder their education in fields like physics. Through the Programme for International Student Assessment (PISA), a worldwide study that measures math, science, and reading abilities of 15-year-olds in 79 countries, the OECD most recently placed Brazil among the lowest performing in math and science. Nearly half of 15-year-olds in Brazil today score below minimum mathematical proficiency for their grade level.

And outreach efforts that “have existed for a hundred years in the U.S. and Europe” — for example, university professors visiting high schools — are rare in Brazil, especially in public schools, which enroll most students, he says.

“In Latin America, there is a huge disparity between public and private schools,” Berkovits said in an interview with APS News in 2021. “Public schools are way behind.”

“It’s not hard to get students interested in black holes,” he added. “But most don’t know the math — they don’t have the background to understand what people are talking about.”

A few years ago, Berkovits spotted a chance to help. In 2012, the São Paulo-based physics institute that Berkovits now directs, the ICTP South American Institute for Fundamental Research (ICTP-SAIFR), partnered with the influential Perimeter Institute in Canada. The Perimeter Institute, a physics research center, had long invested in programs for high school students. Its physicists worked with teachers to develop an enormous collection of high school-level physics lessons on topics like dark matter and relativity. As a partner institution, ICTP-SAIFR could use these materials.

Berkovits realized that, if the materials could be translated into Portuguese, they could be shared with public high school teachers and students in São Paulo — and perhaps equip more young people from disadvantaged backgrounds to pursue physics. So Berkovits recruited a team of local teachers, including Ana Luiza Serio and Lucas David, to help him launch training workshops for other high school teachers and a Saturday lecture series for high school students. 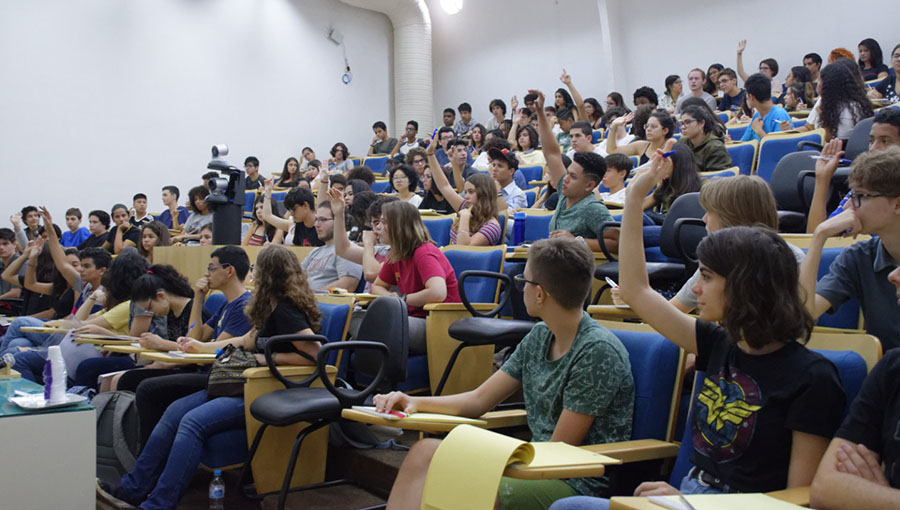 The effort made an impact, says Berkovits. In Brazil, to be admitted to an undergraduate program, students must pass a subject test. The students who participated in the lecture series and received the outreach lessons “were essentially able to pass this exam because they took these courses,” he says.

The promising results in São Paulo encouraged Berkovits to scale up the project. But to move beyond the borders of Brazil, the materials would need to be translated into Spanish, the national language of nearly every other country in Latin America.

Seeking to fund the Spanish translation work, Berkovits applied to, and received a grant from, the APS Innovation Fund in 2020. Since then, his team has translated into Spanish all 18 volumes of lessons developed by the Perimeter Institute.

“The next step is, of course, to spread [the lessons] to different classrooms,” he says.

Navigating the COVID-19 pandemic, Berkovits was forced to keep the earliest implementation workshops online. Despite these limits, the workshops inspired a unique spin-off project: His team partnered with teachers from La Paz, Bolivia, and the city’s Max Schreier Planetarium to create a joint workshop on cosmology, he says.

With pandemic travel restrictions easing, the team will hold their first in-person teacher workshop this fall. “We have about ten people coming from different countries in Latin America,” says Berkovits.

“For [the teachers], it’s exciting because now they have material that they can actually talk with confidence about, that the students find interesting,” he says.

Despite the success stories, Berkovits says big challenges remain, particularly in funding — “paying the costs for high school teachers to be able to come to our workshops.”

For now, “the funding is enough for these workshops [in São Paulo], but it’s not enough to send people to other countries.” For example, if his team wanted to create a base in another South American city, they’d need funding from that city. “That’s a challenge,” he says.

Still, Berkovits is thinking carefully about the future. “The main problem is getting the students from the public high schools involved in science,” he says. “That’s something that’s slowly changing, but that’s the main hope — that eventually, the pool of potential physicists will be much bigger.”