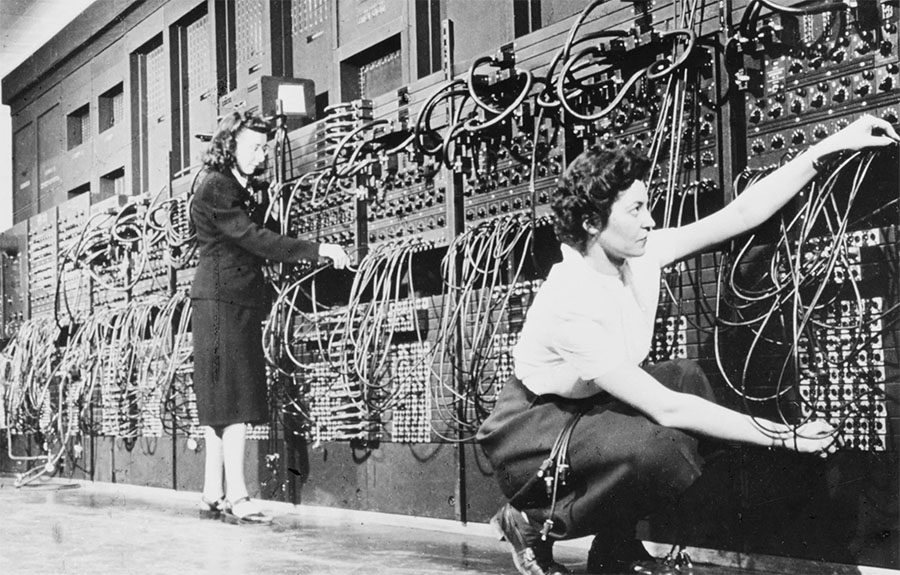 Marlyn Wescoff (left) and Ruth Lichterman were two of the ENIAC’s first programmers.

In December 1945, a secret sat behind a heavy door at the University of Pennsylvania’s Moore School of Electrical Engineering. Eighty feet long, made of hulking black metal, and weighing 30 tons, “it was just a monstrous thing,” recalled Betty Snyder Holberton a half century later. She and five other young mathematicians, Kathleen McNulty (later Mauchly Antonelli), Jean Jennings (Bartik), Marlyn Wescoff (Meltzer), Frances Bilas (Spence), and Ruth Lichterman (Teitelbaum), were the secret’s keepers, tasked with figuring out how it ticked and putting it to use.

That secret was the Electronic Numerical Integrator and Computer, or ENIAC, the world’s first programmable modern computer. Financed by the United States Army, designed by physicist John Mauchly and engineer J. Presper Eckert, and programmed by the six women, the ENIAC was first put to work on December 10, 1945, solving a math problem from the Army’s Los Alamos Laboratory. The program likely involved ignition calculations for the hydrogen bomb, but remains classified to this day.

However, the computer’s existence wasn’t hidden for long. The ENIAC was unveiled to the public on February 15, 1946, in a splashy demonstration held at the Moore School. “Electronic Computer Figures Like a Flash,” read a headline in The New York Times. The program the ENIAC ran in two hours, ballistic trajectory calculations, “would have kept busy 100 trained men for a whole year,” the article declared.

In reality, the calculations would have been the purview of 100 trained women. And the six who programmed the ENIAC weren’t mentioned in the press, nor at the demonstration. “No attendee congratulated the women. Because no guest knew what they had done. In the midst of the announcements and the introductions of Army officers, Moore School deans, and ENIAC inventors, the Programmers had been left out,” writes Kathy Kleiman in Proving Ground: The Untold Story of the Six Women Who Programmed the World’s First Modern Computer. “On probably no other day of my life have I experienced such thrilling highs and such depressing lows,” Jennings Bartik later said.

Four years earlier, in 1942, the Army sent out notice that it was looking for women mathematics majors to work at the Moore School. Women had been working as “computers,” the term at the time for people who do calculations, since the late 19th century, says Janet Abbate, author of Recoding Gender: Women’s Changing Participation in Computing and a historian at Virginia Tech. “It was work that required a mathematical education but was a repetitive and dead-end job, so it didn’t appeal to educated men,” she explains. The new opportunity at the Moore School involved the war effort, and across the U.S., women were following Rosie the Riveter’s lead and joining the workforce to help in the fight. Nearly a hundred women, including the six who would later program the ENIAC, were hired as computers at the school for the Army’s Ballistics Research Laboratory. 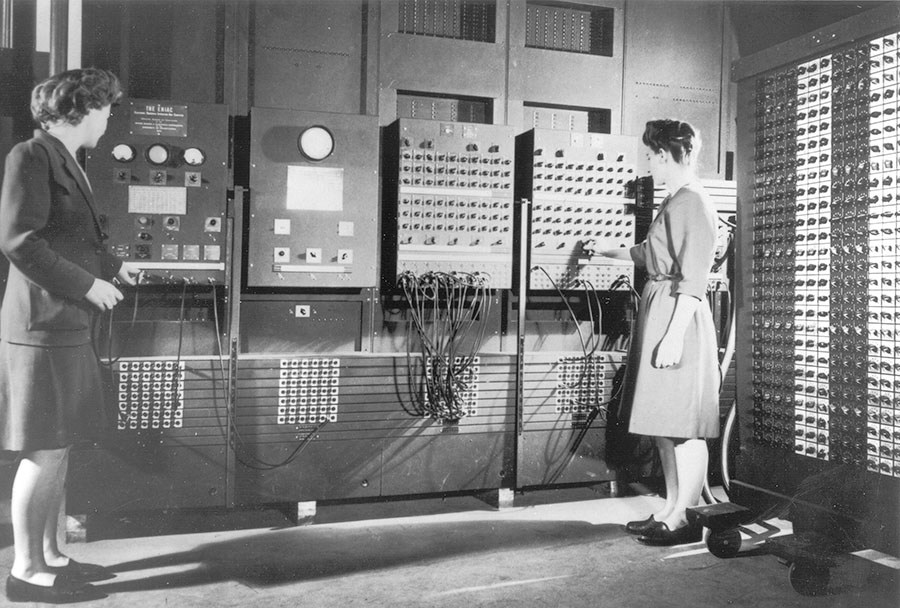 For a salary of about $1,620 per year ($27,000 today), they calculated ballistics trajectories for artillery used by the military. A gunner on the battlefield needed to know the precise angle to position their weapon based on that day’s conditions, but each measurement required a complex differential equation. With pencil, paper, and heavy desktop calculators that were the size of modern microwave ovens, the computers toiled over the problems, inputting possible values for variables like temperature, humidity, wind, and missile weight. “It was really very complicated, and it required an awful lot of calculating,” McNulty Mauchly Antonelli said in a 1997 interview included in the documentary “The Computers: The Remarkable Story of the ENIAC Programmers.”

But the work was vulnerable to error, and one trajectory took 40 hours to calculate by hand. In 1943, with the war raging overseas, the Army agreed to fund an idea from Mauchly to create an electronic, programmable, digital calculator. He, Eckert, and a team of engineers built the ENIAC using 18,000 vacuum tubes, 10,000 capacitors, and 6,000 switches across 40 nine-foot-tall panels that stretched around three walls of a huge room.

The device was finished in summer 1945, but it needed to be told what to do — it needed “programming.” ENIAC team leader Herman Goldstine later wrote in his book The Computer: from Pascal to von Neumann that “six of the best computers” were summoned and selected for the job. There was one hiccup: They didn’t have the security clearance to see the classified machine at first, so they had to learn the mechanics of the ENIAC from tangled diagrams. They broke up the differential equation into many small steps and figured out how to set up the operations in parallel across the cables, switches, and panels of the machine. “The ENIAC was a son of a bitch to program,” Jennings Bartik said in an interview included in “The Computers.” But their experience calculating longhand paired with their new knowledge of the machine’s components proved valuable. “We learned to diagnose troubles as well as, if not better than, the engineer,” Jennings Bartik said.

The war ended in September before the group had the ballistics calculations up and running, but the Army brass gave the go-ahead for scientists from Los Alamos, which had just been publicly revealed as the birthplace of the atomic bombs dropped on Japan, to run a calculation on the ENIAC. In November, the six computers — now programmers — were finally allowed to see the behemoth to help the Los Alamos physicists load their secret problem onto the machine. The women had no idea what the program was for, only that it was a complicated first test for the computer. The ENIAC service log marked the occasion of the calculation’s first run on December 10, reading “Problem A—12/10/45,” followed by “Machine tested—OK.”

After the ENIAC’s successful run of the Los Alamos calculations and the February 1946 unveiling, many of the programmers continued working with the computer. Several went on to have long careers in technology, including Jennings Bartik, who programmed subsequent computers BINAC and UNIVAC I, and Snyder Holberton, who created the first program for sorting large data files and worked in computing until the 1980s. Thanks to the work of Kleiman, who sought them out after seeing an unnamed photograph of the women with the ENIAC, the programmers’ contributions were rediscovered and reappraised towards the end of the twentieth century. In 1997, all six were inducted into the Women in Technology International Hall of Fame, and the last of the ENIAC programmers, Bilas Spence, passed away in 2012. And though the six weren’t recognized publicly in ENIAC’s heyday, Abbate, the historian, said they made an impression on the women who followed in their footsteps.

“Women who started programming in the 1950s recalled female programmers being common,” she says. “The early programmers may have been invisible to the wider world, but they were visible to other women in the field.”