Plenary speakers at an APS meeting on nuclear physics discussed the past, present, and future of nuclear weapons. 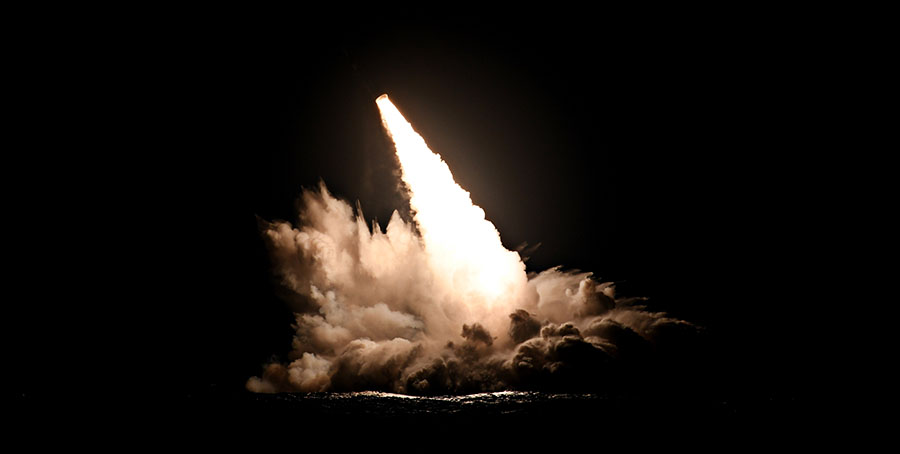 In a U.S. test in Sept. 2019, an unarmed ballistic missile called Trident II D5 is launched from the submarine USS Nebraska off the coast of San Diego.

Alan Robock tells one story often. Addressing a virtual audience over Zoom, he repeated it — ostensibly a success story of politicians listening to scientists — at the Fall 2022 Meeting of the APS Division of Nuclear Physics.

As the story goes, Robock was part of a group of U.S. and Soviet scientists in the 1980s who predicted the consequences of nuclear war using scientific models. The work introduced the public to the concept of nuclear winter. If countries were to use nuclear weapons again in war, the models predicted, the weapons would not only directly kill millions, but also cause firestorms whose smoke would block sunlight. The resulting climate change would trigger famine and death around the world.

Politicians responded to these sobering predictions, as well as broader geopolitical shifts. “The arms race ended,” said Robock, a climatologist now at Rutgers University. President Ronald Reagan and Soviet leader Mikhail Gorbachev cited the research as a motivator for the shift. The number of nuclear weapons peaked in 1986, with about 65,000 worldwide. In 2022, nine countries possess 12,720, according to Nagasaki University’s Research Center for Nuclear Weapons Abolition.

But a worrisome new chapter has begun. Since Russia invaded Ukraine in February 2022, President Vladimir Putin has made veiled statements — for example, that Russia has “more modern [weapons] than the weapons NATO countries have” — that the U.S. government has interpreted as threats to deploy nuclear weapons.

Physicists have an important role to play in technology development and policymaking related to nuclear weapons, expressed Robock, along with three other speakers during the meeting’s plenary sessions on nuclear threat and mitigation. Robock encouraged meeting attendees to join the Physicists Coalition for Nuclear Threat Reduction. This group, formed in 2020 with a grant through the APS Innovation Fund, advocates for government policies that reduce nuclear threats.

And nuclear physics research can help promote nonproliferation, as Bethany Goldblum of Lawrence Berkeley National Laboratory discussed in her talk. For example, some researchers are investigating the use of antineutrinos to monitor nuclear material. As radioactive material like uranium undergoes fission, it releases antineutrinos, which can signal how much material is inside a reactor. If a bad actor removed this material from a nuclear reactor, an antineutrino detector could flag it.

Still, the world faces grave nuclear risks, Robock explained. Stockpiles are so large that, if a Hiroshima-sized bomb had dropped every two hours from the end of World War II until today, it would still not have used up today’s global arsenal, he said.

Nuclear security expert Steve Fetter of the University of Maryland, who co-founded the Physicists Coalition, gave an overview of the state of nuclear weapons in the world. He focused mainly on the U.S. and Russia, which together control more than 90 percent of the world’s stockpile. Both countries have weapons for three different types of deployment — intercontinental ballistic missiles (ICBMs), launched via rockets, some of which can reach anywhere on the planet; submarine-launched ballistic missiles, which can launch nuclear weapons with similar range from underwater; and bombers, or airplanes that can carry and deploy nuclear weapons. Russia’s strategy relies on more intercontinental ballistic missiles, whereas the U.S. relies on more submarine-based ones. Both countries have around 1,000 nuclear weapons that can be launched within minutes, said Fetter.

Fetter also discussed developments in nuclear weaponry. The U.S. government plans to spend $1.3 trillion to replace and upgrade its arsenal starting in 2030. “Even by the standards of the U.S. Department of Defense, this is a lot of money,” said Fetter.

Russia has invested in new nuclear weapon technology, too. In 2018, Putin announced a new ICBM called Sarmat with a range of 18,000 kilometers. Sarmat “could be launched to attack the United States from the South Pole to avoid U.S. missile defenses,” said Fetter.

Russia is also developing a missile called Burevestnik that not only carries a nuclear weapon but runs on nuclear power. “Just saying the words ‘flying nuclear reactor’ probably conveys why this is not the best idea,” Fetter said about the system, which cannot carry radiation shielding. In 2019, Russia’s nuclear energy agency reported a radiation accident that some experts believe was caused by a test of this missile’s prototype. Seven people were killed.

Robock presented contemporary versions of his nuclear winter models. Working with climate, ocean, and crop modelers, Robock’s team predicted the consequences of a nuclear war involving the U.S., NATO, and Russia, as well as one between India and Pakistan, two countries with smaller nuclear capabilities.

From a scientific standpoint, these models have unique constraints: not a lot of data exists to validate their accuracy. In addition to using information from the Hiroshima and Nagasaki nuclear bombings of World War II, researchers also look to climate events with potential analogs — for example, wildfires in Australia and Canada in the last decade.

In their study, published in Nature Food, Robock and his colleagues found that a war between India and Pakistan could kill more than 2 billion people, and a U.S. and NATO war against Russia could kill over 5 billion. They also found that about 20 times more people would die from starvation than directly from nuclear war. (Some researchers who have modeled possible scenarios have predicted far less severe global impacts.)

“So what do you do with this information?” Robock asked. “The most natural reaction is to try to forget it. As Mark Twain said, ‘Denial ain't just a river in Egypt.’”

But he also sought to give listeners a sense of agency. “My reaction is to try and do something about it,” said Robock. In 2017, the United Nations passed a treaty to ban nuclear weapons, and 68 countries have ratified it, although the U.S. and Russia have not. He quoted Beatrice Fihn, whose organization, the International Campaign to Abolish Nuclear Weapons, won the Nobel Peace Prize in 2017: “The story of nuclear weapons will have an ending, and it is up to us what that ending will be.”