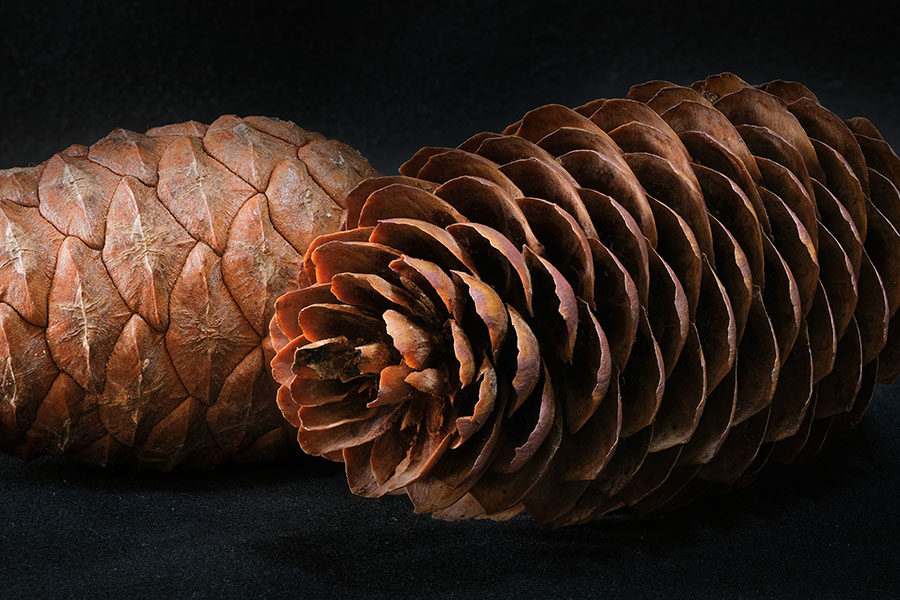 What do pinecone scales and steam engines have in common?

They both do work — and both can be analyzed using thermodynamics.

Steam engines and other heat engines, which are powered by temperature changes of a fluid, have been extensively studied and applied since the field of thermodynamics was founded in the 1800s. Now, researchers are exploring alternative methods of generating work, including mechanisms that mimic pinecone scales, which open because of changes in humidity.

In a paper published October 26 in Physical Review Applied, researchers describe new thermodynamical models of engines driven by humidity changes. Their work adapts traditional thermodynamics to this developing technology and applies the results to natural and artificial materials.

“Surprisingly, natural systems had a very high efficiency compared to artificial systems” in their analysis, says Ho-Young Kim, a mechanical engineering professor at Seoul National University and a co-author of the paper.

Engines that produce motion from a material’s response to a humidity change are an example of technologies called soft engines. Soft engines can be driven by a material’s response to other things, like changes in light, and can be parts of soft robots that forgo rigid parts, batteries, and combustion. These traits make soft robots promising for many uses, including in medical settings where batteries or hard edges might injure patients.

“I think this paper is very important for this field,” says Zhu Liangliang, an engineering professor at Northwestern University in Xi’an, China, who was not involved with the paper. He says that the thermodynamics and energy efficiency of soft machines are important for practical applications but rarely researched.

Kim says he was inspired to research humidity-driven soft robots by plants’ motion, and that he was surprised to find a principle that governs both heat engines and soft engines.

Kim and colleagues followed in the footsteps of Sadi Carnot, a French engineer who studied steam engines in the 1800s. Carnot conceived of the cycle that describes an ideal, maximally efficient heat engine. The cycle describes a fluid (usually a gas) that changes temperature, volume, and pressure in four stages, producing work as it shifts between two temperature extremes. The researchers adapted Carnot’s cycle into their own, describing instead a material moving between two levels of humidity.

But a soft engine that faces no resistance isn’t very practical, so the team adapted their model to account for the material pushing on something as it expands, which reduces efficiency. They then modeled the cycle for a type of soft engine that bends, using a mechanism similar to that in pinecone scales. This further decreases efficiency but can be advantageous in generating movement over a longer distance.

The researchers’ results indicate that, for a bending soft engine, a thinner absorbent layer tends to be more efficient but also to produce less mechanical work. So, the team proposes using an alternative value, called the work ratio, to evaluate the performance of a soft material in engines that bend. The value reflects the portion of a soft material’s hypothetical extractable work that is actually extracted by the bending mechanism — so the higher the value, the more effective the engine is at getting work from its soft material.

Using existing literature, the researchers calculated the work ratio of several engines based on various humidity-absorbing natural and artificial materials. They found that the work ratios for the engines using natural materials tend to range from 0.2% to 2%, while almost all the artificial soft engines that didn't use plant-based materials had work ratios below 0.1%. The analysis suggests plant-based bending soft engines are generally more than twice as good as their purely artificial counterparts at harnessing the potential work of their humidity-absorbing material.

“Plants are very, very clever creatures in making motions without muscles,” Kim says. “We have to learn from plants.”

The team suggests that the higher efficiency of natural materials is likely related to the pace of plants’ mechanisms, which generally operate more slowly than those of their artificial counterparts.

“I'm not saying that this methodology should be adopted by every soft material scientist, but I'm just suggesting that you have to look at the energy efficiency of those soft materials,” Kim says. “This is one methodology you can adopt.”

Bailey Bedford is a science journalist based in the Washington, D.C. area.