In large collections of stars, sodium is far more abundant than expected. To explain this, scientists bring a stellar reaction into the lab. 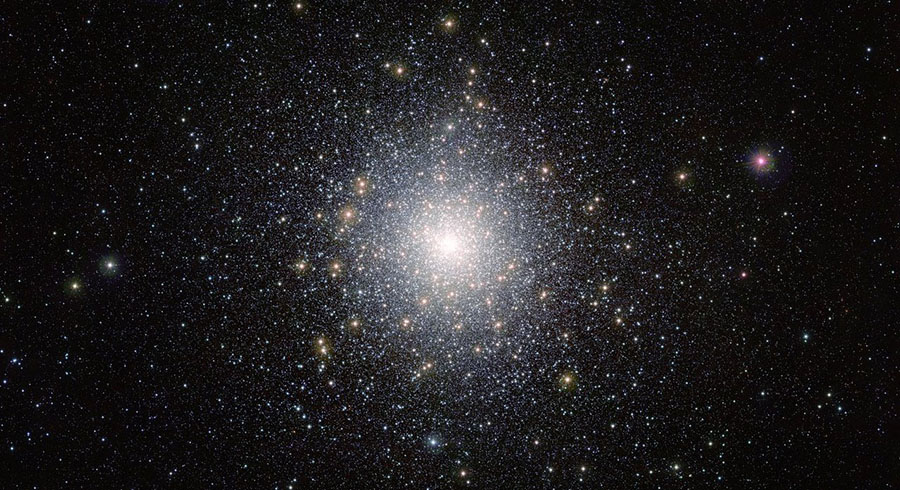 A globular cluster of stars called 47 Tucanae (NGC 104), as seen from the Paranal Observatory in Chile. In some globular clusters, scientists have observed almost 100 times more sodium than is present in our own solar system.

All atoms began as the universe’s simplest ingredient: hydrogen. And when hydrogen is heated and mixed in the extreme environment of a star, complex nuclear reactions produce heavier elements.

We are made of these heavier elements — “star stuff,” as Carl Sagan famously noted. But the precise recipes for star stuff are a bit of a mystery, since we can’t exactly send a probe into the interior of a star to observe reactions as they occur.

This October, at the Fall 2022 Meeting of the APS Division of Nuclear Physics in Spokane, Washington, experts gathered to discuss in detail how heavier elements are created in stars. Some researchers focused on the strange abundance of a specific stellar ingredient familiar to terrestrial recipes: sodium.

Though we can’t peer inside stars to watch the cooking process, we can identify their elemental ingredients by analyzing the light they give off. Sodium has been found to have a variety of effects on stars, from changing their color to affecting their lifecycle. And in globular clusters, which are massive spherical conglomerations of up to millions of stars, scientists have observed almost 100 times more sodium than is present in our own solar system.

“Sodium is very easy to destroy. The star should have no problem destroying it,” said Richard Longland, associate professor at North Carolina State University and researcher on the project. (To nuclear physicists, “destroy” means “change into another element.”) “But there’s a surprisingly large amount of sodium in these stars, so there must be something about the stellar environment that is keeping the sodium from being absorbed into other reactions.”

Besides the mystery of sodium’s abundance, scientists have also observed an anti-correlation between sodium and oxygen in stars. The more sodium there is, the less oxygen there is. But recipes that produce or destroy sodium don’t tend to produce or destroy oxygen, and vice versa.

So the question becomes twofold: why is there so much sodium in globular clusters, and why is it correlated to the amount of oxygen?

“The problem is that we don't know,” said Longland. “You can't see by looking at the outside of the star what the conditions on the inside of the star are, and that's why there's still a lot to discover. But this work can help us start ruling things out.”

In the sodium-destroying reaction studied in this case, sodium absorbs a proton and turns into magnesium. Considering that stars are mostly made of protons, this would be an easy recipe to execute in a stellar oven. Kaixin Song, a graduate student at NCSU, replicated the reaction in a lab, shooting helium-3 at a sodium target to spark a proton transfer, and measured the reaction rates to see how often this might happen in a star. These reaction rates are fundamental to accurate stellar modeling, where theorists predict the abundances of different elements in different types of stars. The sodium-destroying rate Song found was lower than expected, but not low enough to explain the sodium abundance.

“It’s very cool to me to be able to do things in the lab that correspond to processes in stars and supernovae,” said Song.

While it’s impossible to directly observe the nuclear reactions that create heavier elements in stars, there are exciting new possibilities for indirect observation of stellar interiors. Scientists have been studying “starquakes” — seismic activity within stars — to understand the composition of stars, in the same way that geologists use earthquakes to probe Earth’s structure. And very recently, particle physicists detected neutrinos that were produced by a reaction in the interior of our Sun.

The precise details behind the creation of heavier elements might seem inconsequential, but research like this could help answer an important existential question: how our “star stuff” gets made.