Study Reports the Impact of COVID-19 on Recent Physics Grads

Some undergrads, like those squeezed financially, were more likely than others to change their post-graduation plans. 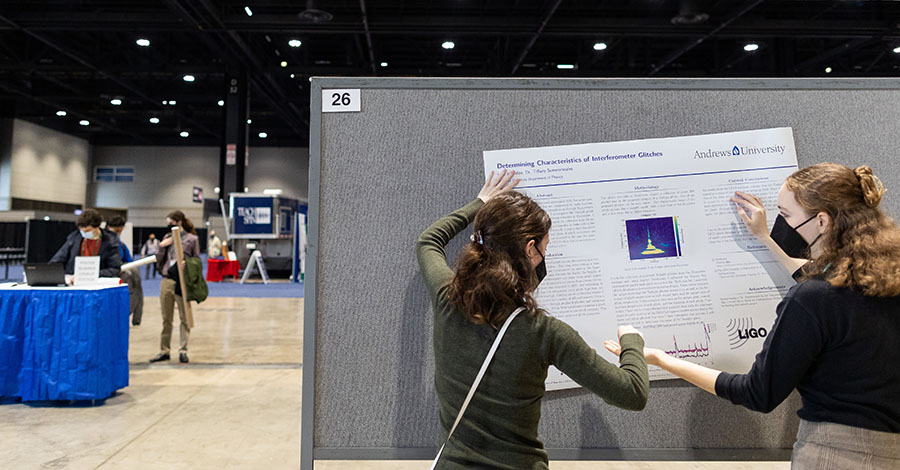 Undergraduates prepare for a poster session at the APS March Meeting in 2022.

Wells Graham, a doctoral student in physics at Wake Forest University, knows all too well how dire the COVID-19 pandemic was for many undergraduates in science.

Graham graduated with a bachelor’s in physics in 2021 from the University of North Carolina, Pembroke, a small university. He says that although his professors did a “great job” of adapting to online teaching during the pandemic, conferences were canceled, and he was never able to take the physics GRE subject test — key to beefing up his graduate school applications.

“Coming from a small school, I was banking on the physics GRE to strengthen my application,” says Graham. “I felt I could not put my best foot forward.” He’s happy to have landed at Wake, but the process was difficult: He was accepted into just two of the seven physics graduate programs to which he had applied.

While some students, like Graham, stuck to their post-graduation plans despite the pandemic, others did not or could not. To study the issue, the American Institute of Physics (AIP) surveyed physics and astronomy seniors in the spring of 2021 about their post-graduation plans, and then again in the spring of 2022, to see if the seniors stuck to their plans. In November, AIP released their report, which captures the experiences of 1,823 seniors.

Anne Marie Porter, senior survey scientist at AIP and report co-author, says that her team sought to understand the factors that might push undergraduates out of physics.

“We asked about [students’] satisfaction with the different aspects of their institution’s response during COVID-19,” says Porter — including financial aid, learning accommodations, IT support for classes, access to mental health services, and on-campus living arrangements. “We really wanted to focus on impacts that could have longer-term effects, beyond just a window into that time period.” 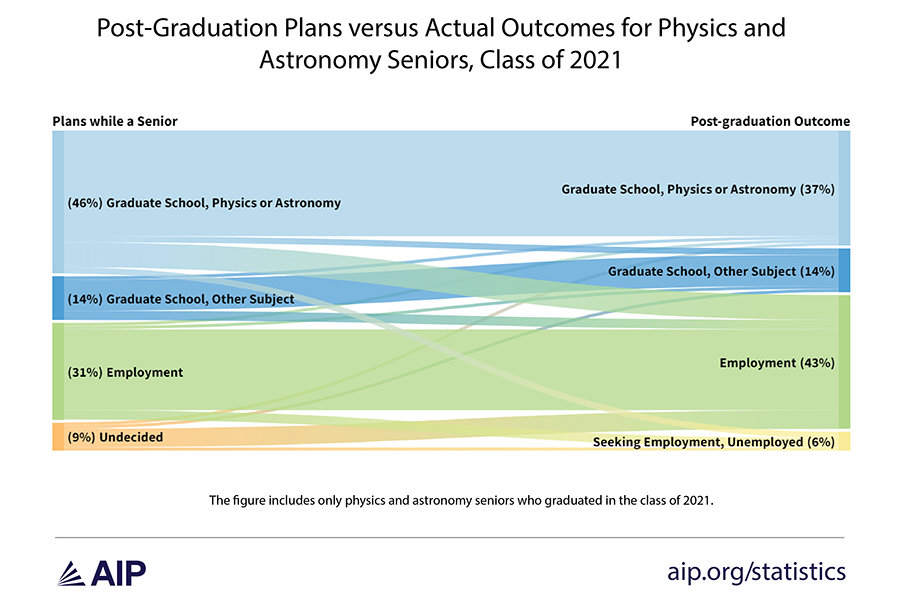 Porter and her report co-author Patrick Mulvey, research manager of the AIP Statistical Research Center, found that about three-quarters (77 percent) of respondents did what they had planned to do after graduation.

For example, of the students who had intended to get jobs, 85 percent actually did, including Theo Axtell-Adams. Axtell-Adams, who majored in applied physics and mechanical engineering at the University of Wisconsin-Stout, says that completing his undergraduate degree during the height of the pandemic had ups and downs.

“Trying to learn in that environment and with such a different structure was difficult for me,” he says, referring to typically hands-on courses that the university pushed online. “Thankfully, I was able to complete an internship the following summer, and my capstone [project] happened the following year in person,” he says. Axtell-Adams is now a Controls Engineer at Midwest Manufacturing after graduating in the spring of 2022; he says that his internship and in-person capstone experience were key to his job application.

Although Axtell-Adams stayed on his intended path, he sympathizes with those whose plans changed. He says that because of the pandemic, he developed an adjustment disorder, which is a stress-related condition. “I’d never experienced that level of anxiety before, and it has taken a long time to get it under control,” he says.

He isn’t alone. Recent studies have shown that COVID-19 caused a drastic uptick in mental health challenges among U.S. undergraduates, worsening the increased stress and anxiety in this group observed well before the pandemic.

But the pandemic’s impacts are still felt in colleges today, sometimes in positive ways. Graham, in his second year of graduate school, says the biggest cultural shift he’s seen at universities is “the now ubiquitous use of video call technologies such as Zoom.” He says he likes this change. “Professors and research collaborators are much more reachable now,” he says.

Axtell-Adams sees some benefits, too: “Classrooms are much more prepared for flexible and online learning now that they have been forced to try it.”