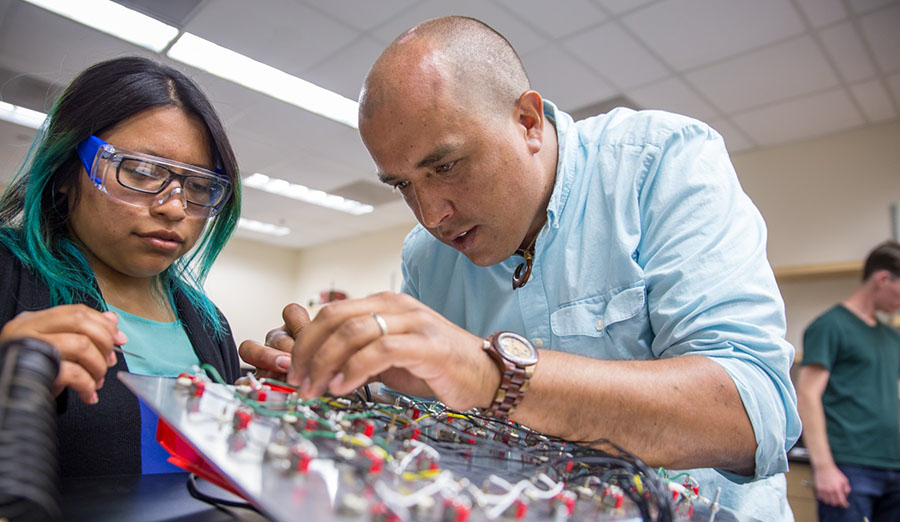 Justin Perron (right), a physics professor at California State University, San Marcos, works with a student. Perron and his colleagues Charles De Leone and Shahed Sharif received a grant from the APS Innovation Fund in Dec. 2020.

The emerging field of quantum information science has far-reaching potential applications — uncrackable encryptions, sensors that enable location tracking without satellites, computers with unprecedented processing power. Although much of the field is still theoretical, technology companies and national laboratories are investing heavily in its development.

“I think we're approaching a tipping point,” said Justin Perron, associate professor of physics at California State University, San Marcos. “There's going to be a case where it's financially beneficial to use these technologies.”

Perron wants his students to get in on the ground floor of the discipline. But unlike large research universities, California State Universities mainly serve undergraduates, and the San Marcos campus only has two other faculty members with a background in quantum mechanics: physics professor Charles De Leone and math professor Shahed Sharif.

When the three began meeting to discuss how to teach quantum information science, the challenge they faced seemed stark: In such a highly interdisciplinary field, having a small faculty put Perron and his colleagues at a disadvantage. “We realized it was really hard,” Perron said.

To build a new curriculum, he and his colleagues decided to look beyond the boundaries of their campus.

In June 2021, with the help of an APS Innovation Fund grant of about $82,000, Perron and his collaborators created a workshop called the Quantum Undergraduate Education and Scientific Training (QUEST), geared toward faculty of primarily undergraduate institutions. During the two-day workshop, nearly 100 participants from more than 60 undergraduate institutions met to discuss the challenges and opportunities of quantum information science education.

Perron found that instructors at other smaller colleges and universities were facing similar struggles to expand their programs. But bringing together quantum physicists, computer scientists, engineers, and other specialists made the conference a “brain trust,” Perron said. Together, participants tackled common stumbling blocks around developing courses, integrating departments, and persuading administrators to support new programs. During one panel, leaders from Google, the University of Colorado, Boulder, and consulting firm Booz Allen Hamilton discussed the skills and knowledge students need to join the workforce.

Another panel focused on making programs inclusive for all students. Because the field of quantum information science is still in its infancy, instructors can shape a research community that is diverse from its inception, said Sharif. “We want to make sure that the educational opportunities are there for everybody, not just people from privileged backgrounds,” he said. “The earlier the interventions, the better.”

Creating curriculum outside of major research universities is already a big step, because smaller, primarily undergraduate schools, like many in the California State University system, “tend to have much more diverse populations,” Sharif said. In 2021, 51 percent of CSU undergraduates were Black or Latino, compared to 29 percent of University of California undergraduates.

In the academic year following the workshops, 16 participants met in four online communities to develop curricula for quantum information science at their institutions. Some created summer courses to introduce undergraduates to the field, while others began building long-term plans to create whole courses or major concentrations.

For Sean Bentley, an associate professor of physics at Adelphi University who is developing a quantum science track for physics majors, the online group has been an invaluable resource. “Talking to people who have already been there, already done it — that saves you so much time,” he said.

Although the groups ended in June, Bentley remains in touch with the other faculty in his group. Virtual resources have become especially important in the wake of the pandemic, he said.

“Conferences are great, but when you're all across the nation, especially if you’re at a small institution where you don't have a lot of faculty to talk to, having these online communities where you can exchange ideas is really helpful,” Bentley said. “This is something that hopefully will continue to grow.”

At CSU San Marcos, Perron and his colleagues are designing a certificate program in quantum information science, which they hope to offer within the next two years. They’re also drafting proposals for more funding to strengthen quantum education in the CSU system.

“You feel like an island at your institution when you're the only one in that field,” Perron said. “We had a hard time trying to do it ourselves. We learned that we could return to the community and everyone else could help us figure it out.”

Jesse Kathan is a science journalist based in Berkeley, California.