An interview with the recipient of the 2023 APS Medal. 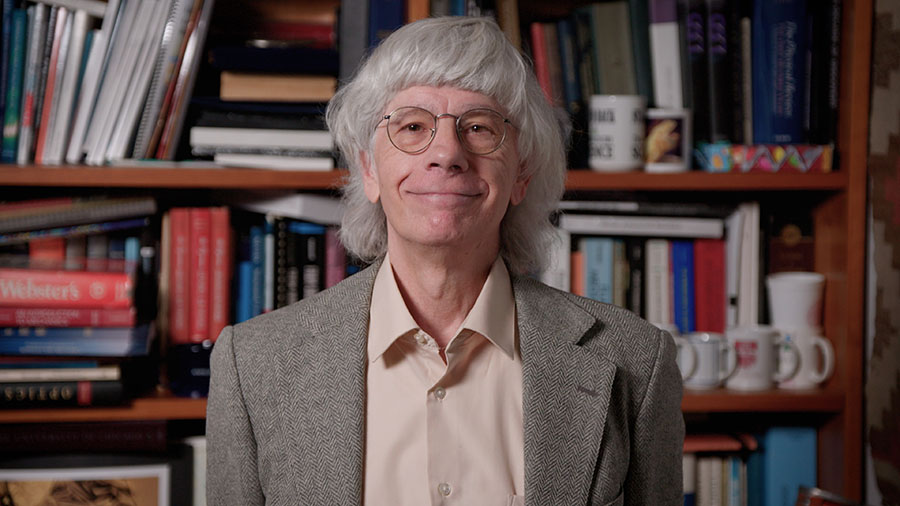 Honey dripping from a spoon; sand shifting in a pile. The world is replete with materials that seem simple, but whose behavior is puzzling beyond expectation. Sidney Nagel, a physicist at the University of Chicago and a leader in soft matter physics, relishes studying the quirky properties of glass, coffee stains, and more — materials that are “disordered,” meaning their components are jumbled at random instead of organized symmetrically.

“I can’t walk down the street and see a stain on the sidewalk [without stopping] to look at it,” he says. “That’s being a true nerd.”

Nagel, who studies non-linear behavior in disordered systems that are far from equilibrium, is the recipient of the 2023 APS Medal for Exceptional Achievement in Research. The award recognizes Nagel “for incisive experiments, numerical simulations and concepts that have expanded and unified soft matter physics.”

But earlier in his career, his work was received differently. “Disorder wasn’t something to be studied,” he says. When he began studying sandpiles, he received a particularly harsh response.

“I remember walking down the hall of my institute and someone said — loud enough that I could hear but behind my back — ‘I don’t know what’s the matter with him. He used to have a promising career in science,’” he recalls.

But Nagel kept at it. “I like to choose problems which satisfy me not just intellectually, but because I find that it's feeding something else,” he says.

Nagel spoke with APS News about the beauty and complexity of disordered systems, and how physicists can chart their own paths.

This interview has been edited for length and clarity.

What does winning the APS Medal mean to you?

It means that the subject matter is being recognized. It was a fledgling field a few years ago, by my standards. I think a lot of people didn’t take it terribly seriously.

This is really for the community of people who are studying these phenomena. It’s a group effort to make this into a field that is exciting, has new things to say, and will bring new young people into the research area.

What are a few of your discoveries that have surprised you?

A surprise was what we did with splashing drops. The drop lands on a flat piece of glass, and if it’s going fast enough, it splashes. We thought that was always going to be the case.

We were trying to figure out how fast the droplets were leaving the splash and how much energy was in them. We thought, “Let's pull a vacuum on this. Then we'll get a big splash.” When we did this, the splash disappeared. The air around us is making the splash.

I could go on. One morning, I saw coffee stains on my counter. Suddenly, I realized these are bizarre, because all the coffee stain is at the edges of these drops. There was more liquid in the middle when the drops came down, and yet, at the end of the drying process, the solute particles [which give coffee its color] were all at the edge. This didn't make sense. I love surprises.

You’re part of a collaboration called “cracking the glass problem,” and you noted that studying glass has let you explore “new regimes of behavior” of materials. What have you discovered about that behavior?

If we understand the nature of disorder in the way that these disordered packings [of materials] can behave, what the elasticity is, this is a way of creating materials that we get to control. A new type of metamaterial, if you will. You could begin to think, “We could train materials.”

This is something that we're working on now. How is memory stored in a material? How can you use that memory to control and manipulate the material? It’s a new area that we hadn't conceived of, as part of what glassiness was about. But studying glassiness led us into this very productive area for me — the idea of memory.

Once I realized memory was something I wanted to study, I looked back and realized, “Oh, there’s memory in so many of my papers from early on.” I hadn’t realized this was a subject that was central to a lot of studies, in different guises.

You’ve been credited with helping to bring the study of granular material, like sand, from engineering into the realm of physics. Tell me about your journey with that research.

In 1987, a paper had come out that said you could keep pouring sand onto this pile until it reached this angle of repose — the largest angle. The avalanches that come off the sandpile should be different sizes, and that should be a power law behavior. This was an idea called “self-organized criticality.”

We found that this was spectacularly wrong, even though it's a beautiful idea. There's only one kind of avalanche that came out.

Along the way, we found that sand had many interesting properties. There was a temptation [to say], “Okay, let's go back to our serious work.” [But] sand should be respected for what it does. Nature [had] just spoken to us and said, “Look, here's something totally different. Are you going to ignore it because society tells you, ‘Oh, this isn't real physics’?”

We started playing with this material and realized that it was a lot more interesting than any of the theories [suggested]. This had to gain acceptance in the community.

What would you tell early-career physicists about how to find fun and joy in physics?

Everyone has their own way of working — some people want to work alone, other people like to work together. There are all different ways of doing physics. Figure out your way of doing physics that allows you to enjoy it [and] want to come back to it every day. The difficult part is that your ego gets into it; try not to pay that much attention to that.

Imagine you could answer any one open physics problem. Is there something you would choose?

No, I don't think so. Rather than say, “Here's the big question I want to answer, and if I do that, I'll be rich, famous, whatever,” I would rather have fun. It’s very much the process that is fun.

Rachel Crowell is a math and science journalist based in Iowa.