When hardware doesn’t work, Fernand Torres-Davila must “figure out why.” 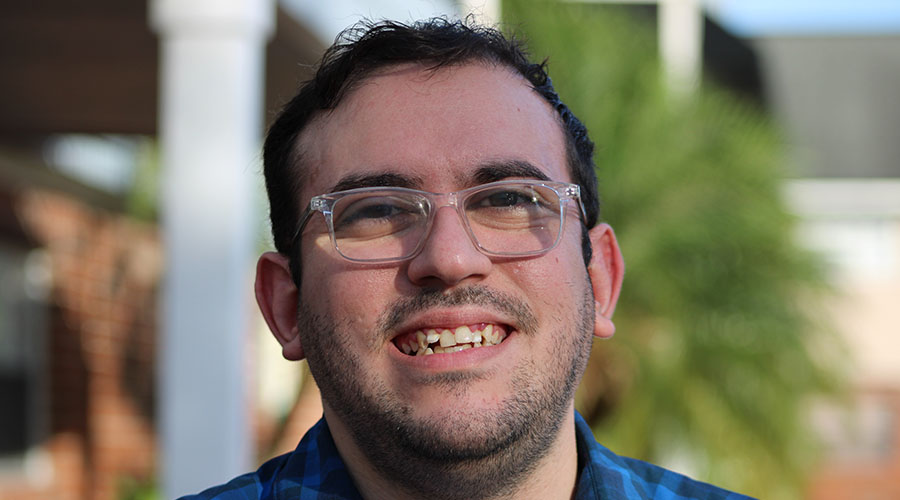 Fernand Torres-Davila was five years old when he first saw the world clearly. With thick lenses in his new glasses, he gazed up and spotted individual stars.

Torres-Davila was amazed not just by what the world looked like from his “fresh point of view,” but by the fact that a seemingly simple innovation — curved glass fitted in a frame — could have such a major impact. This, he says, sparked his early interest in science, an interest that would eventually lead him to enroll in an APS Bridge Program at the University of Central Florida (UCF) to pursue graduate studies in physics and, afterward, land a job as a Honeywell engineer.

Growing up in Puerto Rico, Torres-Davila was drawn to astronomy because of the stunning night sky, he says. Then, in high school, he took a physics class. “[My teacher] was eccentric — very passionate about the field,” he says. “It was a very fun class.” Torres-Davila realized he had a passion for the broader field of physics, not just astronomy. Around the same time, he developed an interest in electronics, robotics, and chemistry; picking one would be tough.

When it came time to plan for college, Torres-Davila made a list of “must-haves.” It included good physics and chemistry programs, as well as an observatory, he says. The Universidad de Puerto Rico, Humacao (UPRH) fit the bill, and it was only an hour’s drive from his family’s town, Bayamón.

In 2011, the summer before starting his undergraduate studies, Torres-Davila enrolled in advanced math courses, which catapulted him ahead in his first year of college. Once at UPRH, he enrolled in the Physics Applied to Electronics program, which allowed him to combine his interests.

His science classes used English textbooks, but class conversation and homework assignments were in Spanish — typical for undergraduate science courses in Puerto Rico, he says.

As the semesters progressed, Torres-Davila’s adviser, Luis G. Rosa, became one of his champions. Rosa guided him toward research experiences, first at UPRH, funded through the NIH-RISE program, and then at the University of Nebraska-Lincoln. These experiences helped put Torres-Davila on track to a doctorate in the field.

But at the end of college, Torres-Davila still wasn’t sure. Was a doctoral program in physics for him? Rosa chimed in with words of encouragement. “He said, ‘you should definitely apply to grad school … You’ll have what it takes to get through,’” Torres-Davila explains.

Torres-Davila chose to enroll in the APS Bridge Program at UCF. He felt that a bridge program would offer more security and support, and UCF was an easy plane ride home to Puerto Rico. He also had extended family in Orlando. His aunt and uncle there “played a huge part in getting me through that transition,” he says. “They made me feel right at home.”

Still, “that first semester was really challenging,” he says. He reasoned that taking extra undergraduate courses at UCF might help him establish a “baseline.”

“I felt having the opportunity to take the undergrad courses ahead of the actual grad courses would make me feel more comfortable in pursuing [my master’s],” he says. “It definitely helped,” he says. When he enrolled in graduate physics courses in his second year, he felt better prepared.

The physics department was much larger at UCF than at UPRH, which had a “small but united feel.” His coursework changed, too: Now everything was in English, and group work in class wasn’t the same.

But Torres-Davila received encouragement from his family, as well as staff and faculty at UCF — especially his advisor, Laurene Tetard. And his aunt and uncle in Orlando “always made sure to say how proud they were,” he says.

For his master’s research, Torres-Davila studied how two-dimensional materials could drive catalytic reactions, like the hydrogenation of carbon dioxide into water and other useful chemical products. This work served as the basis for his doctoral research.

After passing his candidacy exam to continue in the UCF doctoral program, Torres-Davila sailed through the rest of his program. His research group was one of the best aspects of graduate school, he says.

“I always tried to keep track of what everyone was working on, so I could help out, and they did the same,” says Torres-Davila. And Tetard, his adviser, was “always looking out for what was best for us,” he says. “I have nothing but gratitude for her.”

After graduating with his doctorate in August 2021, he decided to take a short break. “I prioritized spending some time off to cool down my brain and see relatives I hadn’t seen in a while,” he says — including his new baby niece in Wisconsin.

After several months, Torres-Davila felt ready to tackle job applications head on. He landed a position as an Advanced Hardware Engineer at Honeywell, a Fortune 500 company that creates and manufactures technologies. “I was a lot more confident in my own abilities” going into the job than into grad school, he says, in part because, at Honeywell, he was building off the lab skills he’d been cultivating since college — over a decade of experience.

As a Honeywell hardware engineer, Torres-Davila works in electronics failure analysis for a division based out of Florida. “We’re given something that isn’t working, that should be,” he says, and “we have to figure out why.” He uses an array of lab techniques and equipment to chase down the root cause behind the failure in a single component, device, or circuit. It’s admittedly more complicated than the technology that first sparked his interest in science: eyeglasses.

What advice does Torres-Davila have for other young physicists? “Don’t be discouraged when stuff doesn’t go according to plan,” he says. “Everyone’s path is unique.”