The Physics Teacher Education Coalition (PhysTEC) has announced the newest members of “The 5+ Club”—institutions that graduated 5 or more well-prepared high school physics teachers. PhysTEC is a project of APS and the American Association of Physics Teachers (AAPT) to address the severe national shortage of K-12 physics teachers. Every year the coalition recognizes those institutions that were especially high performers.

Few colleges and universities graduate more than two physics teachers each year, and most commonly that number is zero. Since 2001, PhysTEC has helped universities transform their physics teacher education programs into national models. The project is supported by the National Science Foundation, and the APS 21st Century Campaign, and by direct and in-kind support from each of its partner institutions.

PhysTEC first awarded The 5+ Club to six institutions during the 2011-2012 academic year. This year’s awardees include 9 universities that graduated a total of 53 highly qualified teachers for the 2016-2017 academic year. To put this number in perspective, if U.S. colleges and universities collectively graduated about 800 new physics teachers per year, the national shortage would be largely addressed.

The new members of The 5+ Club (and numbers graduated) are:

For every complete application that documents five or more physics teacher graduates in a single academic year, the PhysTEC project will 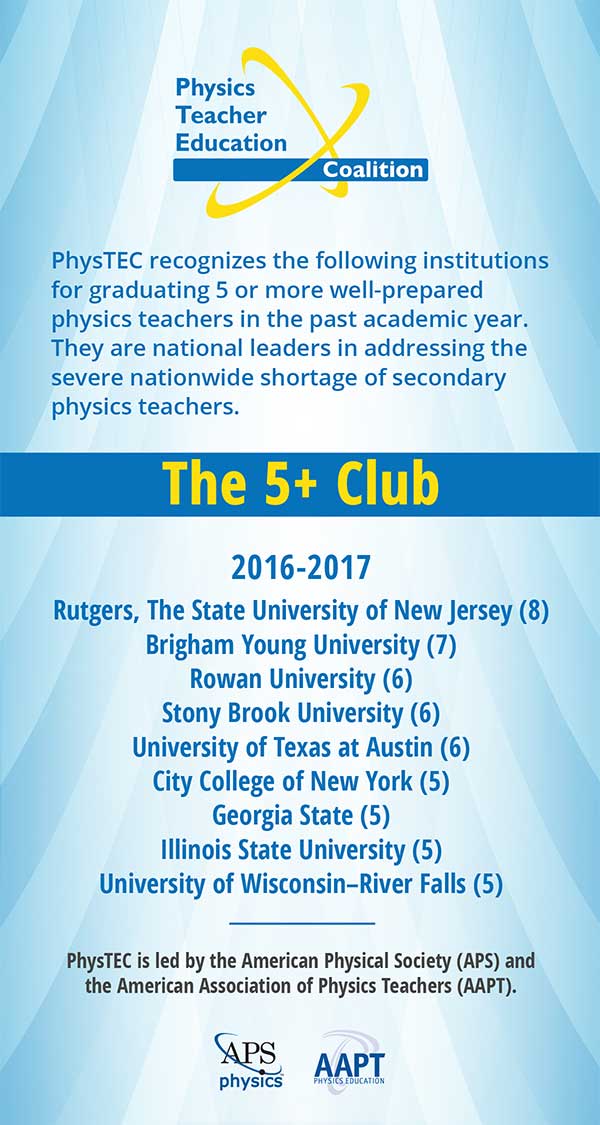 For more information on PhysTEC and The 5+ Club, visit phystec.org