APS March Meeting Highlights to Be Shown on APS TV

At this year’s APS March Meeting in New Orleans, APS TV will be returning for its fifth year to capture the latest news and meeting highlights. From March 13 to 17, at New Orleans Convention Center, international film company WebsEdge will be producing a new daily program featuring topical discussions, studio interviews with keynote speakers, new research in physics from around the world, and insights and reactions from attendees.

Watch APS TV: At the APS March Meeting, you will be able to watch APS TV on multiple TV screens around the convention center. Keep an eye out for filming throughout the meeting and on set at the APS TV location in the APS Village. APS TV will also be available to watch on the following hotel television channels:

You can also catch up with APS TV online via the APS Website and on YouTube. Updates throughout the meeting will be shared on twitter using the #APSMarch hashtag. 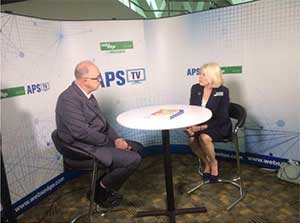