Physical Review Letters, the flagship journal of the American Physical Society, has now published a peer-reviewed paper reporting what the authors say might be evidence for the theory of cosmic inflation. 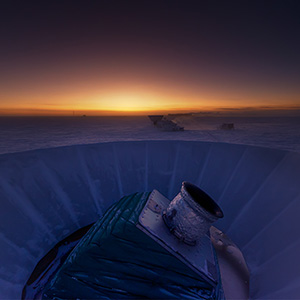 On March 17, 2014, researchers from the Background Imaging of Cosmic Extragalactic Polarization (BICEP2) experiment announced that they had obtained evidence of cosmic inflation – the theory that after the big bang, the universe expanded by 60 orders of magnitude in about 10-35 second.   In a paper published today in Physical Review Letters, the BICEP2 team presents their data and analysis in a peer-reviewed venue. APS has made this paper open-access and free to read for all.

After the initial announcement, the results drew controversy.  The research team claimed they had seen a signature in the polarization of the cosmic microwave background only explicable by inflation, while other scientists said the results could be nothing more than emission from interstellar dust. In the published paper, the authors argue that dust cannot account for the results, but say that more measurements will be necessary to overcome all doubts.

If the primordial origin of the signal is confirmed by upcoming studies, the result will be a "milestone in the history of cosmology," the editors note.  The next chapter of the story will be written when other experiments, such as the European Space Agency's PLANCK satellite, release their results later this year.

Editorial: Signals from the Dawn of Time? - Physical Review Letters

Viewpoint: Peering Back to the Beginning of Time - Physics