Five collaborations in Canada, Japan, and China will split the $3 million prize 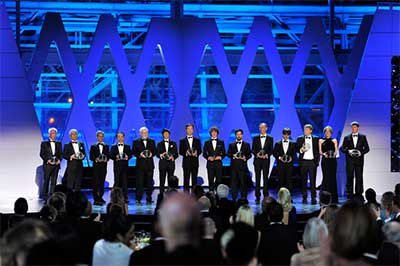 Winners onstage during the 2016 Breakthrough Prize Ceremony on November 8, 2015 in Mountain View, California.

It seems to be the year of the neutrino. The 2016 Breakthrough Prize in Fundamental Physics was doled out to a bevy of neutrino collaborations on Sunday, following closely on the heels of the 2015 Nobel Prize in Physics, dedicated to neutrino oscillations.

The prize honors five experiments: Daya Bay, KamLAND, KEK to Kamioka (K2K) / Tokai to Kamioka (T2K), the Sudbury Neutrino Observatory (SNO), and Super- Kamiokande, for "the fundamental discovery and exploration of neutrino oscillations, revealing a new frontier beyond, and possibly far beyond, the standard model of particle physics." The experiments were conducted in countries spanning the globe, from SNO in Canada to Daya Bay in China, to Super-Kamiokande, KamLAND and K2K/T2K in Japan.

Neutrinos are born as one of three flavors — electron, muon, and tau. But measurements from Super-Kamiokande in 1998 and SNO in 2001 showed that these flavors change as neutrinos travel through space. This flavor oscillation means that neutrinos must have mass — a groundbreaking result given that the standard model posited massless neutrinos. On October 6, Takaaki Kajita of the University of Tokyo and Arthur McDonald of Queen’s University, Canada received the Nobel Prize for these discoveries.

More neutrino experiments followed, nailing down the parameters relevant for describing neutrino oscillations. The most recent measurement recognized in the prize was made in 2012, by the Daya Bay experiment, which measured the last unknown mixing angle that describes the oscillations. But there is much that remains unknown about neutrinos, such as the precise values of their masses, whether they are their own antiparticles, and whether there may be other types of unseen "sterile" neutrinos. Current-generation experiments are attacking those questions now.

Unlike the Nobel Prize, which is awarded to at most three individuals, this prize honors the full teams that worked on the five experiments — a whopping total of 1,377 scientists. The awards also differ from the Nobel Prizes in their larger monetary awards (the Nobels provide around $1 million to laureates) and in their willingness to award prizes for theoretical work that has not yet been confirmed by experiment, such as string theory. A committee formed of previous Breakthrough Prize recipients chooses each year's winners.

The leaders of the experiments accepted the prize during a celebrity-filled gala, broadcast live on the National Geographic Channel, and hosted by Seth MacFarlane, creator of the TV series Family Guy. The Breakthrough Prizes are the brainchild of Russian billionaire Yuri Milner, who established the awards in 2012, in hopes of raising the profiles of the world's most innovative scientists. The awards have financial backing from a host of Silicon-Valley elites, including Google co-founder Sergey Brin and Facebook co-founder Mark Zuckerberg.

The leaders selected to accept the prize on behalf of their experiments included: Yifang Wang of the Institute of High Energy Physics, Chinese Academy of Sciences, and Kam-Biu Luk of the University of California, Berkeley and Lawrence Berkeley National Laboratory, for Daya Bay; Atsuto Suzuki of Iwate Prefectural University, Japan for KamLAND; Koichiro Nishikawa of the High Energy Accelerator Research Organization, Japan, for K2K/T2K; Arthur McDonald, for SNO; and Takaaki Kajita and Yoichiro Suzuki of the University of Tokyo, for Super-Kamiokande.

An additional prize, the New Horizons in Physics Prize, honors early-career physicists who have made significant contributions in their fields, with awards of $100,000. This year's prize honored three groups of scientists: B. Andrei Bernevig of Princeton University, Liang Fu of MIT, and Xiao-Liang Qi of Stanford University, for "outstanding contributions to condensed matter physics, especially involving the use of topology to understand new states of matter"; Raphael Flauger of the University of Texas at Austin, and Leonardo Senatore of Stanford University, for "outstanding contributions to theoretical cosmology"; and Yuji Tachikawa of the University of Tokyo, for "penetrating and incisive studies of supersymmetric quantum field theories."

An award for high school students made its first appearance at this year's prizes. The Breakthrough Junior Challenge prize is given to a high school student for creating a short film explaining a scientific idea. The award went to Ryan Chester, 18, who made a video explaining the special theory of relativity. He won a $250,000 scholarship, along with a $50,000 education grant for his teacher and a $100,000 science lab for his high school.

Several key papers from the experiments were published in Physical Review Letters: