Physicist Burton Richter, who shared the 1976 Nobel Prize in Physics, died in Palo Alto, California, on July 18 at age 87. He was an APS Fellow and recipient of the 1975 Ernest O. Lawrence Award for excellence in research and the 2010 Enrico Fermi Award for lifetime achievement, both given by the U.S. Department of Energy. He received the nation’s highest scientific award, the National Medal of Science, in 2012. Richter served as APS President in 1994.

"Burt was an articulate and strong voice for physics and science broadly, as well as a remarkably successful researcher,” said APS President Roger Falcone. “Through the clarity of his thought and expression, together with his engaging wit, he was a very effective scientific leader for his laboratory and university, the nation, and the world, for decades.”

In what became known as the November Revolution in particle physics, Richter led the group of researchers at the Stanford Linear Accelerator Center (SLAC) who in 1974 discovered what they called the psi meson. At the same time, an independent group led by Samuel Ting at Brookhaven National Laboratory found what they called the J particle. The two teams announced they had found the same particle in November 1974. Papers reporting the discovery were published together in Physical Review Letters, and the particle has since been known as the J/psi meson. The finding sparked intensive searches for new elementary particles that would help complete the jigsaw puzzle of the Standard Model.

“In my career I have met no one who has made more fundamental contributions in electron-positron and electron-electron colliders, in the precision instrumentation used in colliders and in experimental physics,” said Samuel Ting in a Stanford University News article. “After we received the Nobel Prize together in 1976, I met him many times and we became good friends. My wife, Susan, and I are going to miss him deeply.” 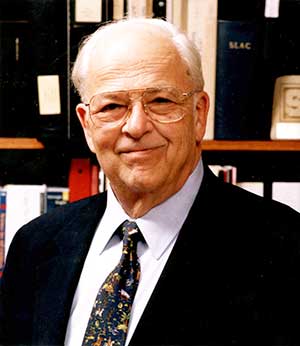 Richter received his B.S. in 1952 and his Ph.D. in 1956, both from the Massachusetts Institute of Technology. After postdoctoral research at Stanford University, he became a professor of physics there in 1967. In the 1970s, Richter was instrumental in building the Stanford Positron Electron Asymmetric Ring collider (SPEAR) at SLAC. He was Director of SLAC from 1984 to 1999.

In addition to his research in physics, Richter served on numerous advisory committees and was interested in industrial applications of science and technology, especially sources of energy. He chaired the U.S. National Research Council Board on Physics and Astronomy, the U.S. Secretary of Energy’s Nuclear Energy Task Force, and the Lawrence Berkeley National Laboratory Advisory Board. Richter was also a member of the influential JASON group that advises the U.S. government.

Symmetry article about the November Revolution