The executive committee of the APS Division of Atomic, Molecular, and Optical Physics (DAMOP) has voted to move the division’s 2018 meeting from Charlotte, North Carolina, to Fort Lauderdale, Florida. The move comes in response to a law known as HB2 enacted by the North Carolina state legislature in March 2016 that requires people to use the public bathroom that matches the gender stated on their birth certificates.

According to a message sent to DAMOP members by the committee, shortly after the measure became law the division leadership began discussing whether the ordinance would result in an unwelcoming environment for transgender physicists attending the Charlotte meeting.

“We had extensive discussions within the chair line and the executive committee about this issue,” DAMOP Chair Steven Rolston of the University of Maryland wrote in an email to APS News. “Although we were unhappy that withdrawing from Charlotte would punish the city whose ordinance precipitated HB2, we felt that it was imperative DAMOP and the APS provide a welcoming environment for all members.”

The committee was also concerned about bans instituted by the states of New York and Connecticut on travel to North Carolina by state employees. These travel bans would directly affect DAMOP members who are employed at public universities.

According to the committee message, the leadership discussed whether DAMOP should be making a political statement and whether moving the meeting would punish the city of Charlotte for a state law outside its control. However, an “overwhelming” majority of the committee voted to move the meeting to Florida.

APS recently issued its own Code of Conduct for participants of its meetings, and the committee statement indicated that “HB2 seemed to run counter” to it. “The recently adopted Code of Conduct of the APS reinforces that we are inclusive society of scientists, and should all be treated with respect,” Rolston noted. 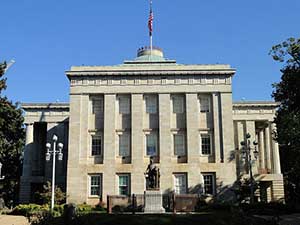