The sudden passing of Deborah Jin in September 2016 struck a sorrowful chord within the physics community. The internationally renowned atomic physicist — affiliated with the University of Colorado at Boulder, and JILA, a joint institute of the National Institute of Standards and Technology and the University of Colorado — was known as a pioneer in ultracold atomic and molecular research. Her legacy will be prominently recognized, however, thanks to the efforts of the APS Division of Atomic, Molecular, and Optical Physics (DAMOP).

The Deborah Jin Memorial Endowment campaign, announced by DAMOP in December 2016, aimed to raise an additional $100,000 to supplement the existing "APS Award for Outstanding Doctoral Thesis Research in Atomic, Molecular, or Optical Physics." Not only does this award acknowledge thesis research of outstanding quality and achievement, but it provides travel allowances for finalists to attend the annual DAMOP meeting, up to $1000 each. The winner of the award, chosen at this meeting, receives a $2,500 stipend.

Within five months of the campaign start, over $135,000 was raised in Jin's honor and DAMOP members renamed the thesis award "Deborah Jin Award for Outstanding Doctoral Thesis Research in Atomic, Molecular or Optical Physics." Over 40 individuals donated  to her endowment, including seven individuals who each contributed over $10,000.

With this additional funding, the division hopes to fund more finalists to attend the annual DAMOP meeting, and pay for more students to attend, with the goal of enhancing the diversity of student attendees.

"Debbie Jin was dedicated to mentoring young scientists... three of her former students won the DAMOP thesis award," the campaign page states. "To her friends, family and students, it seems particularly appropriate that her memory be honored by the renaming of that same APS Award."

To donate to the Deborah Jin Memorial Endowment. 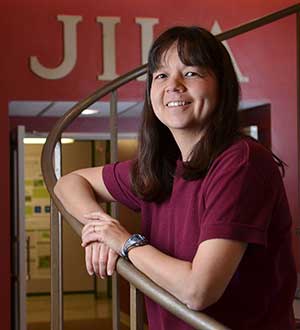