Former Republican U.S. Congressman Vernon Ehlers, 83, died at his home in Grand Rapids, Michigan, on August 15. Ehlers was a nuclear physicist who won election to the U.S. House of Representatives in 1993, and served until his retirement in 2011, representing the 3rd congressional district of Michigan. He was the first of a small, select club of three physicists, including former Rep. Rush Holt (D-NJ) and current Rep. Bill Foster (D-IL). He was a strong supporter of scientific research, science education, and a defender of the National Science Foundation.

"Vern was a serious scientist of some accomplishment," observed Rush Holt, chief executive officer of the American Association for the Advancement of Science, about his former congressional colleague. "But he understood very early on that involvement in politics and public matters was not incompatible with serious physics research and teaching. Vern realized that there were opportunities and obligations to be involved in public affairs."

Holt noted that such a stance took some nerve. "Back when he was advising [former Congressman and U.S. President] Gerald Ford, it was not something a young physicist would normally do. It took the recognition that this was something a scientist could and should do."

"Vern Ehlers was a friend and a mentor to me when I entered Congress as the 3rd member of the bipartisan Ph.D. Physicists' Caucus," said Foster. "At the time I was elected, Vern had already spent more than a decade trying to bring logic and rational analysis to the deeply irrational business we were in. He understood both the need to insist on valid scientific analysis of technological issues like Ballistic Missile Defense and the separate need to apply one's deeply held beliefs towards issues like environmental protection. Vern's career will serve forever as a model to anyone thinking of using their technical knowledge to make Congress and our world a better place."

Born in Minnesota in 1934, Ehlers received his bachelor’s and Ph.D. degrees in physics from the University of California at Berkeley. He carried out research at the Lawrence Berkeley National Laboratory and then joined the faculty of Calvin College in Grand Rapids. He entered the Michigan state House of Representatives in 1983. In 1993, he entered the U.S. House of Representatives after winning a special election to replace Rep. Paul Henry who died in office.

Michael Turner, director of the Kavli Institute for Cosmological Physics at the University of Chicago and former APS President, served with Ehlers on the APS Physics Policy Committee. "Vern was the first Ph.D. physicist in Congress and he did us proud," said Turner. "As they say, you only get one chance to make first impressions, and Vern made a good first impression for the physicists who would follow. He was bi-partisan, low-key and wise."

"His colleagues knew he had a science background, but he wasn’t pushy or preachy about it," added Turner. "Instead, he was very approachable and a good communicator. He was generous with his time and over the years provided much wise counsel to the APS. When he stepped down from Congress, he bemoaned the growing polarization. He served at a time when science was bi-partisan and we benefitted from the support of both parties." 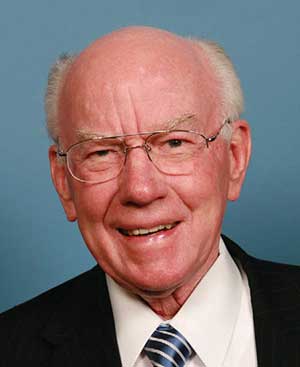