Murray Gell-Mann, who laid the groundwork for modern theoretical particle physics, died May 24 at his home in Santa Fe, New Mexico. He was 89.

In addition to the Nobel Prize in Physics he won for classifying the elementary particles, Gell-Mann was also awarded prizes for his environmentalism and humanism. He was an early member of the independent advisory group JASON, a member of the National Academy of the Sciences, and a Fellow of the APS.

“For me as a young physicist, Murray was both inspiring and intimidating,” said 2019 APS President David Gross. “He professed to know everything about everything and was usually correct.”

Almost no part of today's Standard Model was unaffected by Gell-Mann’s contributions. At a time when new particles popped up weekly, he brought order to the chaotic zoo of hadrons and mesons by reducing them to their fundamental constituents.

“There's nothing more satisfying to a physicist than to find the hidden order beneath all the chaos,” said Sean Carroll, a theoretical physicist at Caltech. “And he was better than anyone in the world at doing that.” 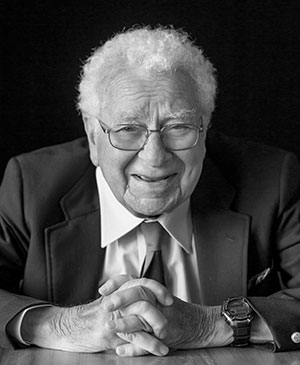 Gell-Mann had not always wanted to become a physicist. Physics was a compromise with his father, who thought engineering would be a more stable source of income than his other interests in linguistics, archaeology and evolutionary biology. Later on, these passions would lead to Gell-Mann’s work co-founding the interdisciplinary Santa Fe Institute, where he was finally able to blend simple principles of physics to explain complexity in other realms.

A perfectionist, Gell-Mann was well-known for his insistence on accuracy in all things and unstinting criticism.

“Working with Murray was delightful,” said economist Ole Peters, a professor at the Santa Fe Institute. “One time we had thought about a particular problem, written down some equations, and convinced ourselves that this was the way to do it. I felt a sense of achievement, leaned back and put my pen down. Murray said: ‘OK, so why is this wrong?’”

But many found him irascible and tough to work with.

“I think the difficult aspect of his personality was his pride in his own intellectual achievement, which he certainly merited,” said theoretical physicist Helen Quinn. “Somehow he held onto it tighter than he needed to when everybody was recognizing it.”

Murray Gell-Mann was born September 15, 1929 in Manhattan to Pauline (Reichstein) and Arthur Isidore Gell-Mann, Jewish immigrants from Europe. As a child, Gell-Mann and his older brother Ben explored the flora and fauna of New York City, which they regarded as a forest that had simply been “over logged.” He became fascinated with his father’s books on etymology and language—an interest he never let go.

After graduating as high school valedictorian at 14, Gell-Mann earned a scholarship to Yale. For his Ph.D., Gell-Mann moved on to MIT, where his supervisor was Victor Weisskopf. In 1955, after a number of visiting professorships, Gell-Mann settled down at Caltech, where he would remain until 1993.

Although their rivalry was later infamous, Gell-Mann worked with his colleague Richard Feynman to explain the weak interaction. (Though they were beaten to the punch by Robert Marshak and George Sudarshan.)

Gell-Mann’s most notable work was on the classification of particles. To explain the long decay times of kaons and hyperons, Gell-Mann and Abraham Pais developed a conserved quantity—strangeness—which was only not conserved in the infrequent weak interactions.

In 1961, Gell-Mann introduced a tongue-in-cheek name for a classification scheme that would revolutionize the way particles were organized: the Eightfold Way. Organizing particles by their symmetries, he (and Yuval Ne’eman, independently) were able to predict the omega-minus, which was discovered in 1964.

That year, Gell-Mann and George Zweig independently proposed that hadrons were composed of constituent particles, then little more than mathematical constructs. Taken from a line in James Joyce’s Finnegan’s Wake—“Three quarks for Muster Mark!”—Gell-Mann’s name stuck. To better organize the quarks and gluons he’d postulated, Gell-Mann put forward the concept of color charge with Harald Fritsch, in 1972.

As experimental discoveries rolled in throughout the ‘70s and ‘80s, they substantiated the theoretical foundations that Gell-Mann had laid, which had become the Standard Model. With his stature in the field, Gell-Mann was able to give support and legitimacy to a then maligned subfield: string theory.

In 1984, he co-founded the Santa Fe Institute to pursue old interests. For Gell-Mann, the simplicity he found in particle physics was deeply related to the complexity of organisms and languages. The title of a book he wrote about this relationship—The Quark and the Jaguar—was taken from a poem by Arthur Sze: “The world of the quark has everything to do/ with a jaguar circling in the night.”

Gell-Mann spent his later years at the Santa Fe Institute, where he worked on unsolved problems in complex adaptive systems until his death.

“I think his greatest characteristic was not just that 'he knew everything.' But he somehow was able to integrate a lot of things,” said physicist Geoffrey West, former president of the Santa Fe Institute. “And I think out of that came this extraordinary ability to ask, so to speak, the right question.”

The author is a freelance science writer based in New York.