In 2005, Glauber was awarded one half of the Nobel Prize for Physics, with John L. Hall and Theodore W. Hänsch sharing the other half, for his “contributions to the quantum theory of optical coherence.” He was also the recipient of the 1996 APS/AIP Dannie Heineman Prize for Mathematical Physics from APS, among others.

“Professor Glauber always brought new and interesting viewpoints to complex issues, whether the topic was the wave and particle nature of light as manifested in his seminal description of quantum optics and coherence of photons, the correlations of particles involved in high energy collisions, or the thrill of engaging in Nobel Prize ceremonies while also being a Nobel Prize winner,” said APS Past President Roger Falcone.

Glauber received both a bachelor’s degree, in 1946, and a Ph.D., in 1949, from Harvard University. While pursuing his doctoral degree, Glauber was recruited to work on the Manhattan Project becoming one of their youngest staff members. His postdoctoral work took him to the Institute for Advanced Study in Princeton and the Swiss Federal Polytechnic Institute in Zurich. Glauber returned to Harvard in 1952, later becoming the Mallinckrodt Professor of Physics there, as well as an Adjunct Professor of Optical Sciences at the University of Arizona. 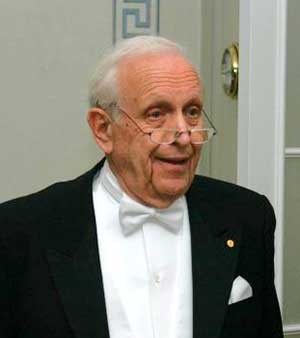 Glauber’s contributions to physics include pioneering work in quantum optics, studying the interactions of laser light and matter, and contributions to theories of high-energy collisions, including analysis of hadron collisions. In addition to the Nobel Prize and the Heineman Prize, Glauber also received the Albert A. Michelson Medal from the Franklin Institute in Philadelphia (1985), the Max Born Award from the Optical Society (1985), and the Alexander von Humboldt Foundation Research Award (1989).