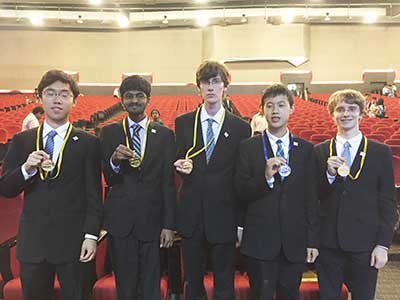 At the Olympiad, top high school physics students from around the world face a challenging battery of tests: a five-hour theory exam and a five-hour experimental exam. The theory questions ranged from the physics of neutrinos and photons emitted from the Sun, to the engineering design of a nuclear reactor. The experimental challenge involved measurements of complex optical diffraction patterns and obtaining the properties of water by studying diffraction of surface waves.

Taehyoung Kim of South Korea had the top score in theory and was the overall individual winner of the Olympiad. Sol Kim of South Korea garnered the top experimental score, and gold medal winner Thao Thi Huong Dinh of Vietnam, was recognized as the top female participant.