Stephen Hawking, perhaps second only to Albert Einstein as the world’s most well-known physicist, died on March 14 in Cambridge UK. Among his peers, he was celebrated for his work on black holes and cosmology, and he was known the world over for his public lectures and explanations of science for general audiences. His book “A Brief History of Time” sold over 10 million copies worldwide.

Hawking received his undergraduate degree in 1962 from the University of Oxford and completed his Ph.D. at the University of Cambridge in 1966. Cambridge recently made his thesis, entitled “Properties of Expanding Universes,” openly available online. In the 1960s, Hawking published seminal papers on gravitational singularities, including “Occurrence of Singularities in Open Universes” in Physical Review Letters. In 1974, he showed that black holes can emit what is now known as Hawking radiation.

While carrying out his doctoral research, Hawking was diagnosed with degenerative motor neuron disease, also known as Lou Gehrig’s disease. Doctors gave him only a few years to live, but the disease slowed; in later years, he worked and lectured from his wheelchair using text-to-speech synthesizers. During his career, he was an active researcher and advised 39 doctoral students. In the 1990s, Hawking began fundraising and advocating for the rights of people with disabilities.

Hawking received many accolades during his lifetime, including becoming a Fellow of the Royal Society at age 32. In 1976, he won the APS/AIP Dannie Heineman Prize for Mathematical Physics. He was elected Lucasian Professor at Cambridge in 1979, the chair held by Isaac Newton. Hawking received the APS Julius Edgar Lilienfeld Prize in 1999, and in 2009, U.S. President Barack Obama awarded Hawking the Medal of Freedom, the highest civilian honor bestowed by the government. His life story was the subject of the 2014 film “The Theory of Everything.”

APS has made all of Stephen Hawking’s research published in the Physical Review journals free to read online.

Read the statement from the APS Presidential Line on the passing of Stephen Hawking. 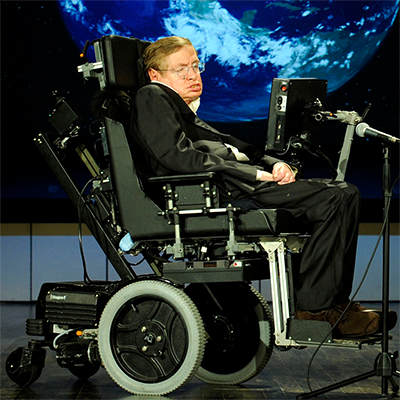