In 1930, the Institute for Advanced Study (IAS) was established near the grounds of Princeton University to act as the "department store for the freedom of ideas." The original and often speculative thinking that the Institute encouraged over the years made it one of the world’s elite intellectual centers, supporting over 33 Nobel Laureates and scores of medalists and prize winners of prestigious awards.

This year, APS is teaming up with the European Physical Society (EPS) to recognize IAS for its pivotal involvement in the advancement of theoretical physics, naming IAS their inaugural joint historic physics site in the U.S.

"We are very pleased to be partnering with the European Physical Society in selecting the first ever Joint Historic Site for physics in the United States," said Homer Neal, President of APS. "The Institute for Advanced Study has been one of the premier centers for theoretical physics in the world, hosting physicists in all stages of their careers."

Among these physicists was Albert Einstein, one of the Institute's first professors. The Institute supported his work just 3 years after its establishment. Einstein remained at the Institute until his death in 1955, leaving a 20-year legacy in the history of the Institute’s growth and reputation.

In celebration of this honor, a public lecture will precede the joint awards. Author and historian George Dyson will tell the story of the Institute's creation, and how and why it came into being. Dyson was the Director's Visitor at the Institute between 2002 and 2003.

"We are deeply honored to be recognized by the American and European Physical Societies," Robbert Dijkgraaf, Director and Leon Levy Professor of the Institute, said in a press release. "[We are also] particularly pleased to be acknowledged for the work of Albert Einstein, who exemplifies the Institute’s commitment to curiosity-driven research and academic freedom and their capacity to produce knowledge that results in technological and cultural advances."

The event will take place in Wolfensohn Hall on the Institute campus, at 5:30 p.m. on Wednesday, November 9. Admission is open to the public with no cost, but registration is encouraged.

Visit the IAS event page to register and learn more. 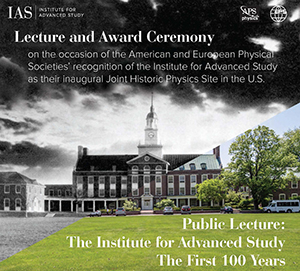