APS Division of Particles and Fields Award for Instrumentation 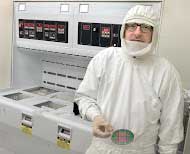 Stephen Holland with his CCD detectors

Photo: University of Hawaii at Manoa

Stephen Holland of Lawrence Berkeley National Laboratory and Gary Varner of the University of Hawaii are recipients of the 2016 APS Division of Particles and Fields (DPF) Unit Award for Instrumentation. The award is given each year by the DPF “for advancing the field of particle physics through the invention, refinement, or application of instrumentation and detectors.”

The 2016 award citation reads "For the development of technologies for detection of signals in frontier experiments, especially the fully depleted charge coupled device [CCD] and the 'oscilloscope on a chip' integrated circuit.”

According to LBNL, Holland has been dubbed “CCD Developer Extraordinaire” and was presented Asteroid #40981, named in his honor, as an SDW Lifetime Achievement Award. His lab profile says that “Stephen Holland is recognized as a pioneer in the development of high-performance silicon detectors for medical imaging, x-ray photon sciences, astronomy, and high-energy physics. He led the development of thick, high resistivity p-channel CCDs that provide very high quantum efficiency in the near-infrared. His CCDs operate in several observatories, including the dark energy camera (DECam) in Cerro Tololo, the BOSS spectrographs at Apache Point, the low-resolution spectrograph at the W.M. Keck Observatory, and exoplanet searches at Lick Observatory.”

Gary Varner is a professor of physics at the University of Hawaii at Manoa. According to the university, the 2016 DPF Instrumentation Award “recognizes his development of state of the art "oscilloscope on a chip" ASICs (Application Specific Integrated Circuits) and associated readout systems, which have had considerable impact on experiments in high energy and astroparticle physics. Professor Varner's readout systems play a critical role in the Belle II experiment located at the KEK laboratory in Tsukuba, Japan. In particular, his IRSX ASIC readout chip, which has a timing resolution of below 50 picoseconds is the basis of the readout system for the Cerenkov particle identification system called the iTOP (imaging Time Of Propagation) detector.”

Last year the award was given to David Nygren and Veljko Radeka for low-noise electronics instrumentation and, in particular, work leading to the development and instrumentation of large volume liquid argon time projection chambers.

For more on the award visit the DPF Instrumentation Award page.