Physicist and APS Fellow Eli Yablonovitch is the recipient of this year’s Isaac Newton medal, the Institute of Physics (IOP) in the U.K. announced today. 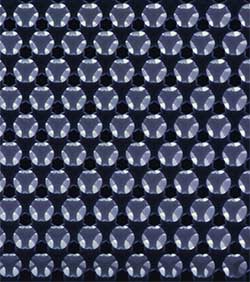 The IOP awards the medal — its highest honor — to recognize “outstanding contributions to physics.”

Yablonovitch, of the University of California, Berkeley, is known for his development of photonic crystals — regularly repeating structures that can block certain wavelengths of light. The award recognizes “his visionary and foundational contributions to photonic nanostructures.”

Photonic crystals can be used to control and steer electromagnetic radiation, making it important for applications such as fiber optics. Yablonovitch’s work has led to a better understanding of the natural world as well — the iridescent hues of some butterfly wings and bird feathers derive from photonic crystals.

His first description of photonic crystals, published in 1987 in Physical Review Letters, garnered thousands of citations, making it the one of the most highly cited papers in the journal. Years later, Yablonovitch and colleagues actually produced such a structure by drilling holes through a solid material.