Formed in the summer of 2014, J-TUPP is a collaboration of the American Physical Society and the American Association of Physics Teachers. The two societies joined forces to create the report with funding from the National Science Foundation. With 10 members recruited from both institutions and industries, the joint effort aimed to identify the skills and knowledge that next generation physics degree holders should possess to be well prepared for successful, diverse careers.

"I believe that departments have a lot to gain by paying greater attention to career preparation," co-chair Paula Heron of the University of Washington told APS News. "Helping prospective students understand the employment benefits of a physics degree could lead to increased enrollment, and graduates who feel [better] prepared to succeed in diverse careers. Research efforts could also benefit if our graduate students and postdocs developed strong teamwork, management, and communication skills."

While many faculty members consider a successful physics career to consist largely of academic research and teaching positions, the committee recognized from the beginning that the overwhelming majority of students who receive a physics bachelor’s degree end up employed outside academia for all or part of their careers. In fact, the Task Force’s report found only about 5% pursue careers as physics professors, concluding that physics programs nationwide could be modified to achieve the array of learning goals that other disciplines and employers desire.

The report’s findings identified that, along with the knowledge of the basic physics curriculum, employers look for the student’s ability to work well in teams, understand applications of physics in real-world settings, and master communication skills, both written and verbal. In order to acquire these skills, the Task Force acknowledged that physics curricula could be modified to achieve their learning goals.

Primarily, their recommended changes to content and pedagogy involve reshaping curricula. Some specific suggestions include: increasing collaborative efforts with other disciplines, modification of degree requirements, and incorporation of co-curricular activities. Ultimately, the Task Force provided ample guidance for physicists who are considering revamping their education goals for the growing diverse student population.

"I hope that [our] report will be useful to physics departments that want to do the right thing, namely prepare their students as effectively as possible for the careers that those graduates will actually have, rather than the careers that physics professors might imagine them having," comments co-chair Laurie McNeil of the University of North Carolina, Chapel Hill. "The combination of academic and industrial perspectives that the members of the task force brought together ensured that we were able to build a comprehensive picture of the knowledge, skills and attitudes [that] graduates need in the workplace, and ways that departments can help their students acquire them." 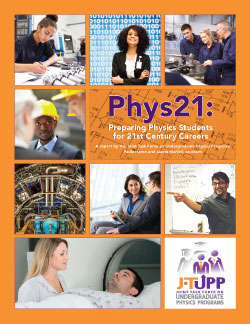