After a successful launch, Juno parked into orbit, coasting the inner solar system awaiting a slingshot toward Jupiter by earth’s gravity. The small craft flew by earth one last time in October 2013, propelling itself forward into the depths of the solar system.

The most heavily shielded spacecraft that NASA had ever deployed, and completely powered by solar energy, Juno traveled over 1.7 billion miles to reach the large gas giant, officially entering orbit at Jupiter on July 4, 2016.

While the distance may seem daunting, Juno maneuvered its way toward Jupiter with extreme precision. Programmed images of star patterns, compared with images registered by Juno’s cameras, steered the probe through deep space. These navigational tactics gave Juno an unbeatable vantage point of Jupiter and the Galilean Moons, capturing a unique time-lapse of these satellites in motion.

Staying on track wasn’t the toughest challenge: Jupiter’s magnetosphere generates a circuit-frying maelstrom of high-energy particles that travel close to the speed of light, forming Jupiter’s radiation belt. On board, the Plasma Waves Instrument (WAVES) instrument recorded the ‘Roar’ of Jupiter — the crossing of the boundary between the Sun’s and Jupiter’s magnetic fields.

Juno navigated away from the worst of the radiation, by approaching the planet over the northern poles, and dropping to an altitude below the radiation belt. This maneuver — called the Jupiter Orbit Insertion — allowed Juno to be captured by the planet’s gravity.

NASA’s recent status report confirmed that the probe pulled off the tricky orbit insertion, and successfully powered up its suite of scientific instruments, preparing for a close-up with Jupiter on August 27, 2016.

Juno is expected to vet previous theories of the planet’s formation, or provide data demanding new theories. The observations are also expected to reveal the planet’s deeper structure, all the way to Jupiter’s core. 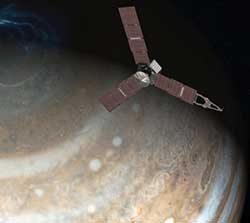 Plasma Waves Instrument and the Roar of Jupiter