Kokabee Petitions Delivered to Iranian Representatives to the United Nations

Human rights activists delivered petitions to representatives of the Iranian government requesting release of imprisoned physicist Omid Kokabee; the petitions were signed by many physics Nobel laureates and 14,000 signers from around the world 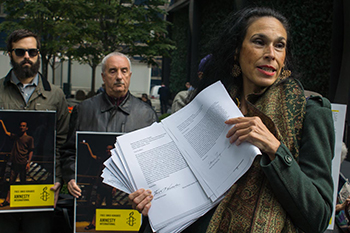 International pressure has been growing on the Iranian government to release Omid Kokabee, a physicist imprisoned since January 2011. He was named the recipient of a human rights award from the American Association for the Advancement of Science on October 27, 2014, the same day that scientists and human rights activists delivered a petition with 14,000 signatures, including 31 Nobel laureates, to the Iranian mission to the U.N.

"His only crime is his conscience and his belief in doing what is right," Hadi Ghemi, a physicist and founder of the International Campaign for Human Rights in Iran, said at a small rally held the following day outside of the Iranian mission.

Because of a recent court decision in Iran, his original conviction was dismissed and he will be retried. Activists are cautiously optimistic that international pressure could pressure the court into releasing him.

"We're hoping," said Elise Auerbach, the Iran country specialist for Amnesty International. "My feeling is that the Iranian government never makes any kind of concessions like that without a lot of international pressure."

At the Iranian mission in New York on Monday, Auerbach and Eugene Chudnovsky, a board member of the Committee of Concerned Scientists, met with representatives of the Iranian government and delivered one petition signed by about half of the living Nobel physics laureates and another with 14,000 signatures from around the world.

"They said they would transfer it to the authorities in Tehran," Chudnovsky said. However he added that the people the met with gave no real indications as to the fate of Kokabee. "They were very vague. They repeated accusations they've repeated for three years."

The delivery was timed to coincide with the presentation of the United Nation's Special Rapporteur on the Human Rights Situation in Iran, which harshly criticized the Islamic state. The U.N. Human Rights Council is also starting its Universal Periodic Review of Iran on October 31.

Omid Kokabee, an Iranian citizen, was arrested at the Tehran airport in January 2011 while he was visiting his family. After being held for 15 months without trial, including a month in solitary confinement, he was sentenced to ten years for "communicating with a hostile government" and receiving "illegitimate funds" in the form of his teaching stipend.

"They are calling him a spy because he was engaged in science at an American university," Ghemi said. "That's preposterous."

In an open letter written from Tehran's Evin prison, Kokabee said that the real reason for his harsh imprisonment is that he has repeatedly rebuffed Iranian government requests to work on military projects, even after he was told he would be released if he collaborated.  As a result, he was awarded the APS Sakharov prize and the AAAS Scientific Freedom and Responsibility Award, and declared a prisoner of conscience by Amnesty International.

"It is uncommon that scientists risk their freedom in defense of the principle of scientific freedom for all scientists, and yet this 32-year old physicist, at the beginning of a promising career, has done just that," the AAAS award's selection panel said in a statement.

Activists hope that at the very least he receives some kind of medical release from prison. Recent news from Kokabee's family said that he has developed a number of serious health problems including heart palpitations, kidney stones, stomach pain, and tooth loss. Despite his worsening health, he has not received any medical care, even though the prison doctor recommended a medical furlough for him. "The most important thing is that Omid's life is in danger and he needs to be released," Ghemi said.

Conditions for Kokabee have worsened in recent months after prison guards allowed unknown thugs to attack him and a number of other prisoners in the political ward where he was incarcerated. In spring, he was transferred out of the political ward into a windowless basement cell shared by over 100 inmates.

The recent decision by Iran's supreme court overturning his original conviction could ultimately lead to his release. The court nullified his original conviction because though the United States and Iran have poor diplomatic relations, the two are not technically at war and therefore the U.S. is not a "hostile government." Similar court actions have led to the release of other political prisoners when the retrial judge decides to commute the sentence to time already served.

Until he is released, activists are concerned about the potential chilling effect Kokabee's imprisonment could have on scientists around the world, especially the approximately 10,000 Iranian students studying in the United States.

"This is not only dangerous for Omid Kokabee, it puts the entire practice of science in the 21st century at risk," Auerbach said. "He wants his talents to be used for peaceful purposes, not for military purposes."