Department of Energy plans to act on panel's recommendations 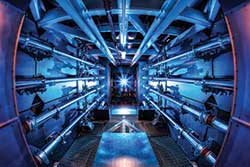 The U.S. Department of Energy (DOE) has responded to a recent report produced by the Commission to Review the Effectiveness of the National Energy Laboratories. The report, released in October 2015, concluded that DOE and its national laboratories have a faulty relationship, with a breakdown of trust between the two.

In a foreword to the DOE response to the report, Secretary of Energy Ernest Moniz wrote, "One of my priorities as Secretary has been to reset this critical relationship — to improve the strategic partnership between the Department and the National Laboratories and, in emphasizing an enterprise-wide approach to the lab system, to help maximize their unique role in the Nation’s innovation ecosystem."

As APS News reported in January, the commission made 36 recommendations aimed at improving the labs' performance, including enhancing technology transfer from the labs, easing travel restrictions to allow laboratory researchers to more easily attend scientific conferences, and raising the cap on Laboratory Directed Research and Development (LDRD) funding, which supports discretionary research at the labs.

In its response, DOE agreed with several of the report's recommendations, noted related actions that it is taking, and laid out objectives, which include improving the laboratory oversight environment, clarifying roles and responsibilities, and managing the laboratories as a system.

The DOE response also includes feedback from the National Laboratory Directors’ Council (NLDC) — a group composed of the directors of all the national labs — and the Secretary of Energy Advisory Board (SEAB) — an advisory committee composed of experts form outside DOE.

The commission seems satisfied with the DOE response. According to the American Institute of Physics' science policy bulletin, FYI, "In recent testimony, the Commission co-chairs—T.J. Gauthier and Jared Cohon—expressed that the response is 'quite supportive' of their recommendations and provides a 'very thoughtful and detailed explanation of actions they have taken, and are taking, in every area of our report.'"

FYI also notes, "Notably, the current director of the DOE Office of Science, Cherry Murray, was a member of the Commission and has indicated her interest in implementing best practices and other reforms based at least in part on the Commission’s recommendations." APS News recently interviewed Murray about her plans for the Office of Science, and she said that she hoped to act according to some of the commission's recommendations.

One significant concern of the commission was the possibility that history would repeat itself. They noted that at least 50 reports have been written on the national labs over the past several decades, but problems have persisted. They proposed a new standing advisory body that would monitor the labs' performance and provide guidance to Congress and DOE.

But, the response says, "DOE believes it would be most efficient to leverage existing bodies to support the implementation of the Commission’s recommendations rather than creating a new external committee." Instead, DOE would use SEAB for this purpose.