The international LGBTSTEM Day was founded by Pride in Stem, House of STEM, and InterEngineering to increase support of LGBTQ+ individuals in STEM fields. 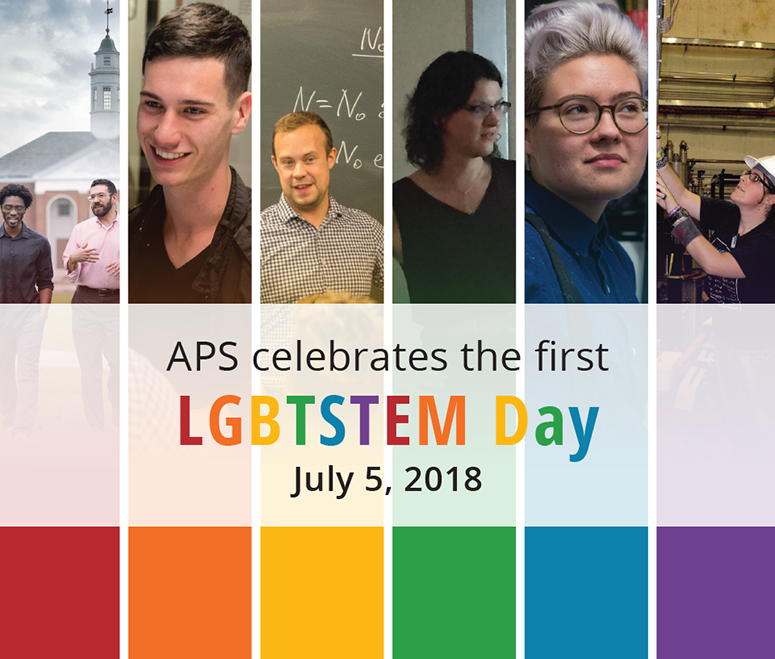 A recent article in Nature highlighted the consequences of a non-inclusive environment: students who identify as a sexual minority leave STEM majors at higher rates than heterosexual classmates. In 2016, the LGBT Climate in Physics report exposed the sobering reality faced by many LGBTQ+ physicists: The survey found that 30% of LGBT physicists feel pressure to stay closeted at their institutions, and more than one third of respondents considered leaving their institution within the year prior to the taking the survey. Half of all transgender or gender non-conforming individuals reported harassment in their department.

We encourage LGBTQ+ allies to advertise their support of LGBTQ+ individuals: Consider posting materials on harassment of LGBTQ+ physicists, closeted LGBTQ+ physicists, and the climate for transgender physicists as a way to spark conversation and fuel inclusivity. Simply displaying a pride sticker can signal to LGBTQ+ identifying individuals that they are safe and welcome in the workplace.

Increasing the visibility of LGBTQ+ individuals is one step toward addressing the difficulties of this underrepresented group in STEM. The LGBT+ OutList provides a link to LGBTQ+ physicists and allies across the country.

Visit the APS LGBT+ Physicists website for information on APS initiatives to improve inclusivity as well as recent news about LGBT+ issues in physics.