With data from a third detector, researchers can better localize source of waves

On September 27, researchers from the Advanced Laser Interferometer Gravitational Wave Observatory (LIGO) and the Advanced Virgo Detector announced their joint detection of a gravitational wave signal from the coalescence of two black holes. The observation by three detectors (two from LIGO and the Virgo detector) allows the teams to improve their ability to identify where in the sky the waves are coming from. The announcement was made at a meeting of the G7 science ministers in Turin, Italy, and a paper describing the detection has been accepted for publication by the APS journal Physical Review Letters. 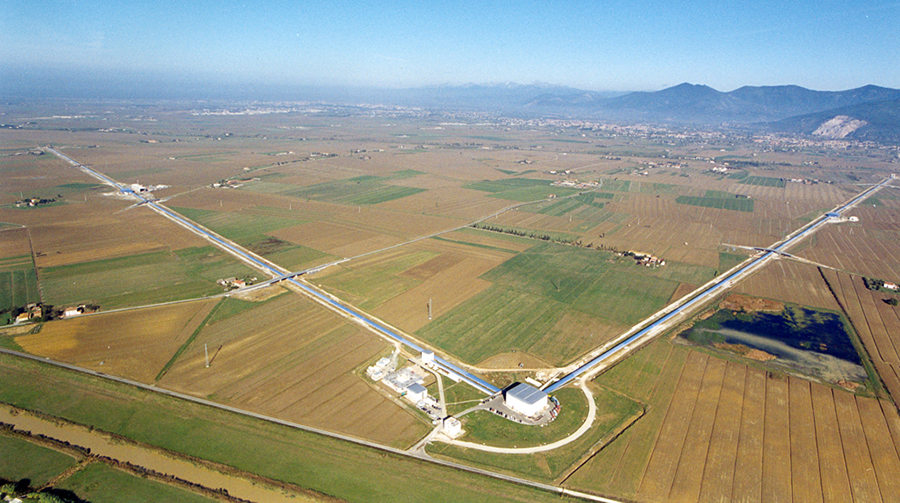 Each of three detectors, LIGO’s two in Hanford, Washington, and Livingston, Louisiana, and Virgo in Pisa, Italy, recorded the characteristic “chirp” signal of the black holes circling each other, then speeding up and merging. By comparing the waves’ arrival time at each detector, the researchers were able to improve the determination of the source direction. Previous detections by LIGO involved two detectors, which meant that the mergers could only be identified as lying somewhere in large swathes of the sky.

Brand said that this heralds a new era of "multi-messenger" gravitational wave astronomy. "With this triangulation, we can locate the source that is emitting these gravitational waves, and this is important because we expect that many such merger events emit other messengers, such as light, x-rays, radio waves, neutrinos, or other sub-atomic particles. These can be studied by both astronomers and astroparticle scientists."

In addition to better localizing the gravitational wave source, the participation of Virgo means that the polarization of the waves can be studied. Like other kinds of waves, gravitational waves oscillate in specific directions. LIGO’s detectors are oriented in similar ways, so they were unable to sense the oscillation direction. Virgo is oriented in a way complementary to LIGO, so the three detectors can together analyze the wave polarization. With this information, even more stringent tests of general relativity should become possible.

"We were really eager that Virgo join us in this endeavor," said LIGO spokesperson David Shoemaker. "This information that comes from position is an amazing addition. We can use this information from pointing to give to our traditional astronomy colleagues - telescopes on the ground and satellites - so that we can do this next step of multi-messenger astrophysics." He added, "The future is incredibly bright for the Virgo-LIGO network."

Observation of Gravitational Waves from a Binary Black Hole Merger