Materials scientist Mark Hersam, who was named an APS Fellow in 2012, is one of this year’s 21 MacArthur Fellows. 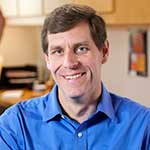 The prestigious award, given each year to individuals across a wide range of disciplines, recognizes “exceptionally creative individuals with a track record of achievement and the potential for significant contributions in the future.”

Each recipient will receive a no-strings-attached, $625,000 grant over five years to spend at they see fit. “What it provides is freedom. It will allow us to explore the most ambitious projects in the most creative ways without any encumbrances,” Hersam said in the award’s announcement.

Hersam and his lab specialize in developing techniques to synthesize and isolate carbon nanotubes. His lab pioneered the density gradient ultracentrifugation process, which produces some of the purest nanotubes on a large scale.

“We can go now even smaller, pushing down to the ultimate limit, down to the size scale of individual atoms and molecules in order to further enhance electronic technology,” Hersam said.

The grant is presented by the John D. and Catherine T. MacArthur philanthropic foundation. Since the fellowship’s inception in 1981, more than 900 scientists, researchers, artists and activists have been recognized by the foundation.

21 Extraordinarily Creative People Who Inspire Us All: Meet the 2014 MacArthur Fellows – MacArthur Foundation