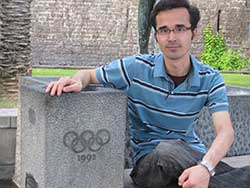 Before his incarceration, Kokabee was a graduate student in physics at the University of Texas, Austin. While visiting family in 2011, he was arrested at the Tehran airport, and later sentenced to 10 years in prison for "communicating with a hostile government" and collecting illegal income — his graduate student stipend. However, Kokabee indicated in an open letter that he is imprisoned as a result of his refusal to collaborate with the Iranian military.

In her letter, Kokabee's mother, Safar Bibi Haghnazari, requests that her son be released so that he may return to his studies, as the school year begins in Iran. The letter is addressed to Ayatollah Khamenei, and posted on the website of the International Campaign for Human Rights in Iran.

"I am a mother in pain. I have been separated from my son for more than 1,700 days," Haghnazari writes. "For the fifth consecutive year, when the academic year begins, in a country whose leader emphasizes scientific progress so much, I ask myself, should Omid be studying in class, or in the corner of a prison cell? Do not let us repeat this question again this year."

Kokabee is reportedly in poor health, suffering from kidney stones, heart palpitations, stomach problems, and tooth loss, but repeated calls for his release, including a letter signed by 33 physics Nobel laureates, have failed. In 2014, Iran's Supreme Court called for a review of the case, but an appeals court upheld the sentence. On July 16, Khamenei pardoned more than 900 Iranian prisoners, but Kokabee was not among those released.

"Apparently there are some forces, which we don't exactly know about, that keep him in prison — very powerful forces that don't want him to be released," says Eugene Chudnovsky of Lehman College, a co-chair of the Committee of Concerned Scientists. Still, Chudnovksy says, Kokabee's mother is "trying to do whatever is in her power to achieve the release of her son."

In 2013, Kokabee received the APS Sakharov prize for his refusal "to work on projects that he deemed harmful to humanity, in the face of extreme physical and psychological pressure."

Kokabee has "been very adamant that he does not want to work on weapons and that scientists should not work on weapons," says Herb Berk of the University of Texas, Austin, chair of the APS Committee on International Freedom of Scientists. "It's quite amazing, his stance, because he is choosing now not only to be incarcerated but... he's choosing a path that might take his life," says Berk. Omid's imprisonment, Haghnazari writes, "has been and continues to be greatly painful for myself and his father." In her letter, she appeals to Khamenei for assistance: "We have taken every legal avenue to free our son but there are those who close the legal channels. Today as a last resort we are petitioning to seek your help."