Cherry Murray Will Take Helm at DOE Office of Science 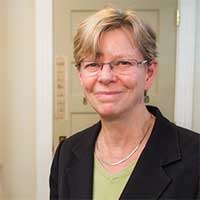 On December 10, a Senate confirmation cleared the way for experimental condensed matter physicist and former APS President Cherry Murray to become director of the Department of Energy (DOE) Office of Science. President Barack Obama nominated Murray for the role in August.

The DOE Office of Science supports research in physics and other scientific fields, and manages 10 of the nation's 17 national laboratories, providing a variety of user facilities for scientists across the country.

Murray, a professor at Harvard, served as dean of the Harvard School of Engineering and Applied Sciences from 2009 through 2014, and has previously worked as a scientist and administrator at Bell Laboratories and Lawrence Livermore National Laboratory. She earned her Ph.D. in physics from MIT in 1978.

In a statement, Secretary of Energy Ernest Moniz said, “Dr. Murray will be an outstanding Director of the Office of Science, drawing upon her experience in academia as professor and dean of engineering and applied sciences at one of the country’s leading universities, key R&D leadership roles in industry, and as former head of science and technology at one of the Department’s national laboratories,” said Energy Secretary Ernest Moniz.