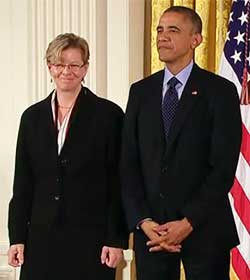 Yesterday, the White House announced the nomination of physicist Cherry Murray for the position of director of the Department of Energy's Office of Science. Murray, a fellow of APS, served as president of the society in 2009.

An experimental condensed matter physicist, Murray has previously held the position of principal associate director for science and technology at Lawrence Livermore National Laboratory, and served as dean of Harvard University's Paulson School of Engineering and Applied Sciences. She earned her Ph.D. in physics from MIT in 1978 and then joined Bell Laboratories, where she held a variety of leadership positions.

Also nominated yesterday was Richard Buckius for the position of deputy director of the National Science Foundation (NSF). Buckius, an engineer, is currently serving as NSF's chief operating officer. Buckius is a professor of mechanical engineering at Purdue University, and earned his Ph.D. from the University of California, Berkeley.