Yoichiro Nambu, a theoretical physicist who laid the foundation for much of particle physics, died of a heart attack on July 5 in Osaka, Japan, according to an announcement made July 17 by Osaka University. 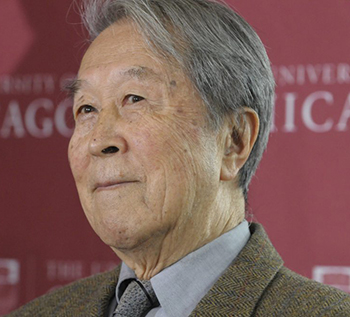 Nambu, 94, a life member, prize recipient, and fellow of APS, received a share of the 2008 Nobel Prize in Physics, for “the discovery of the mechanism of spontaneous broken symmetry in subatomic physics," sharing it with Makoto Kobayashi and Toshihide Maskawa. Nambu was a professor emeritus at the University of Chicago and a distinguished professor at Osaka University.

While studying superconductivity in the 1960s, Nambu realized it had connections to other disciplines, inspiring his development of the theory of spontaneous symmetry breaking in particle physics. His research, published in the Physical Review and Physical Review Letters, inspired the formulation of the theory of the Higgs mechanism in the 1960s. This work itself garnered a Nobel in 2013 for François Englert and Peter Higgs, after the discovery of the Higgs boson. Nambu was also instrumental in the development of string theory and of the three-color model of quarks.

"Dynamical Model of Elementary Particles Based on an Analogy with Superconductivity. I" Phys. Rev. 122, 345 (1961)

"Dynamical Model of Elementary Particles Based on an Analogy with Superconductivity. II" Phys. Rev. 124, 246 (1961)